World B. & Jellybean have taken over the NBA

Would your response be any different if the ratio were one-half?

Suppose your team struggled and was making only one-in-ten treys … should you discourage or limit their usage of this strategic tactic?

Whether it was by design or just happened, in each of the last two seasons, there were 24 NBA teams who made a higher percentage of three-pointers than the percentage of their overall FG’s that were 3FG’s. (Stat-heads refer to the usage rate as “3PAr,” presumably for “three-point attempt ratio.”)

In simpler terms, 80 percent of the league made their three-balls at a higher rate than they took them. 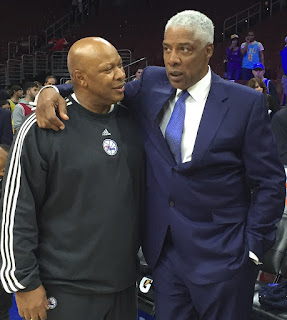 If we trace this back just one more season to 2015-16, making more treys than they took percentage-wise was true of every single NBA team NOT coached by Mike D’Antoni.

Eleven of those teams compete in the Eastern Conference – everybody except the Knicks, Bulls, Pacers and LeBron-less Cavs (who’ve been among the “three-free” 20% the last two years).

So, Coach, wanna rethink your answers?