Markelle Fultz gets definitive diagnosis on shoulder issue - or has he?


Well, it's official - or is it really? Apparently, the 76'ers Markelle Fultz has been diagnosed with Thoracic Outlet Syndrome, which may be all, or part, of the reason his shooting and career have been side-tracked. 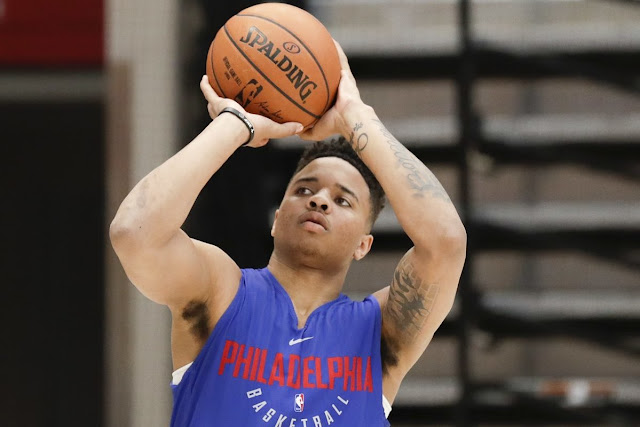 This is a condition where blood vessels or nerves between the lower neck and first rib are compressed, leading to shoulder and neck pain and numbness in the fingers. Two possible causes of the condition are trauma or repetitive activity (per MayoClinic.org):

Trauma. A traumatic event, such as a car accident, can cause internal changes that then compress the nerves in the thoracic outlet. The onset of symptoms related to a traumatic accident often is delayed.

Repetitive activity. Doing the same thing repeatedly can, over time, wear on your body's tissue. You may notice symptoms of thoracic outlet syndrome if your job requires you to repeat a movement continuously, such as typing on a computer, working on an assembly line or lifting things above your head, as you would if you were stocking shelves. Athletes, such as baseball pitchers and swimmers, also can develop thoracic outlet syndrome from years of repetitive movements.

Thoracic Outlet Syndrome (TOS) is not common among basketball players, but it is with baseball players. In this morning's NBA TV broadcast, Kevin McHale all but dismissed the malady as being a major problem and stated simply "The League has overwhelmed him (Markelle Fultz)." Isiah Thomas, on the possibility of Fultz going to the G-League stated, "The number-one pick, once he goes to the G-League, they don't come back. Philadelphia made a serious mistake as far as their evaluation (of Fultz). You have to suck it up and move on."

I don't yet agree with either Kevin or Isiah, not totally. I wrote previously on Markelle's broken shot - gave my own analysis and that of MassLive's Jay King - as two individuals who have gone through a very-similar shoulder issue. Mine has returned after a few decades as I write this and will soon be gone via my self-help rehab.

Fultz has a definite shoulder injury, and yes, he has lost confidence. I believe he is on the right path. McHale once played for a while with a fracture of the foot, not the same as this type of shoulder injury. You can't effectively shoot a basketball if you can't raise your shooting arm high enough to get off a reasonable shot. I hope the kid makes it in the League. There will be more to this saga.