Whenever I see an article by ESPN's Jackie MacMullan, I know it's important - and I know it's good. This one is both. All of the blockquotes are Jackie Mac's. 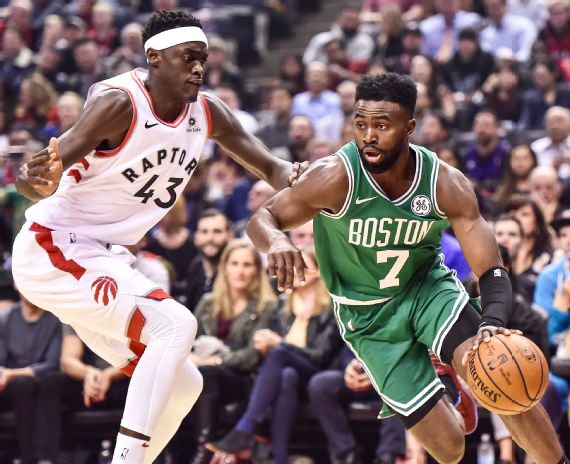 Jaylen Brown was one of several Celtics players that started the season off sluggishly. Boston was losing games they should have won - Brown was struggling - and Marcus Smart decided to use some tough love on Jaylen,

"Say something! Participate with us! Are you with us?"

Jaylen said nothing. He did not respond. Not then anyway. As Marcus said, "He (Brown) didn't say a word." In the early going, Jaylen's production fell well below what was expected.

Opposing teams have privately used words such as "disjointed" and "detached" to describe him (Brown). When the season's first Real Plus-Minus ratings were released, Brown ranked 417th out of 430 players. The question "What's wrong with Jaylen Brown?" became a league-wide referendum.

"Oh, you noticed?" Brown says with a wry smile.

Since his recent return from injury, Jaylen looks like the player we knew he was. He is more aggressive and taking it to the hole.

In his three games as a reserve, Brown has appeared more aggressive, averaging 21 points and five rebounds. He has attempted 17 free throws (5.67 per game vs. 2.25 as a starter) and is shooting 56.8 percent from the floor. Brown, who is often so quiet in the locker room, is aware that his docile demeanor could mask his competitiveness.

"That's a question that others can answer better than I can," Brown says. "I've been misinterpreted before. Sometimes silence is looked at as something different than it is."

At least for the last three games, and I believe long-term, Jaylen is back. He is a bench guy for now, and that is the role he will accept. His main goal is clear.

Brown says he is unfazed by Irving and Smart's motivational tactics. His three-game absence afforded him some time to reflect, watch film and identify why he was putting so much pressure on himself.

"So here's my reality: I'm an NBA player on the Boston Celtics, a team that has a chance to compete for the NBA championship. Nothing else really matters.

Jaylen is still young, and I do not doubt his intellect. He may overthink situations, which results in tentativeness on the court. But when I see him receive the ball away from the hoop - unhesitatingly avoid his defender with that lightening-quick first step - and drive in for a slam, I see just how good he can be. That's the reality. What's his reality.

"Come back in two weeks. The numbers will be different, and so will I."

He may be thinking too much once again!