KD to Boston? At least one GM reportedly thinks it could happen


According to legendary sports journalist Jackie MacMullan, at least one NBA general manager thinks the idea of Kevin Durant decamping to the Boston Celtics in the offseason is plausible enough not to be discounted. 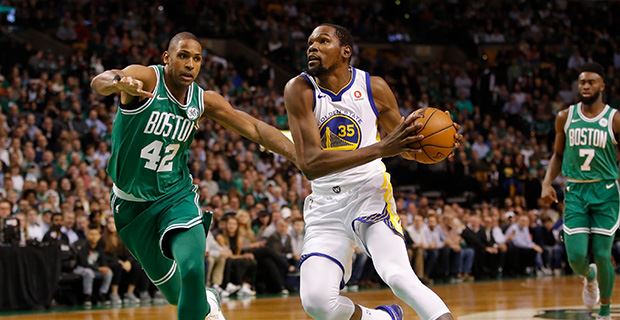 You might be thinking the first thought that popped into my mind - that the unnamed GM's true identity might rhyme with "canny range" - but Jackie, as reputable and un-click-hunting of a writer as is still in the game, would never offer up such a nugget merely to generate content.

If Jackie Mac is on the record saying so, it's a legitimate opinion of an opposing front office. And, on the Brian Windhorst podcast she recently appeared on to say this, Brian had a few interesting observations as well.

Windhorst, of course, does not have the same sort of reputation as MacMullan, so take these with a salt mine, but he believes if the Golden State Warriors truly believed KD was going to go AWOL, they'd be open to a sign-and-trade this season, leaving the door open to getting Durant and Anthony Davis in green and white by summer's end.

Apologies if I just burst an idyllic daydream, but even the idea of our buddy Cupcake the Slim Reaper leaving the Warriors would probably require an implosion of historic proportions; granted, cracks are appearing in the edifice, for sure, but it won't be until the Dubs are eliminated from postseason play that it'll matter, so any ideas of either AD or KD in Boston will have to wait until summer - and quite possibly forever.