Jayson Tatum's line last night - getting the message, learning on the fly


It is easy to forget that Jayson Tatum is only 20 years old and one year removed from his rookie season. The message from both Brad Stevens and Kyrie Irving to him has been to become more than a scorer - to do the diverse little things that lead to a win. Looking at last night's 112-103 win over the Grizzlies, it seems he is getting the message. 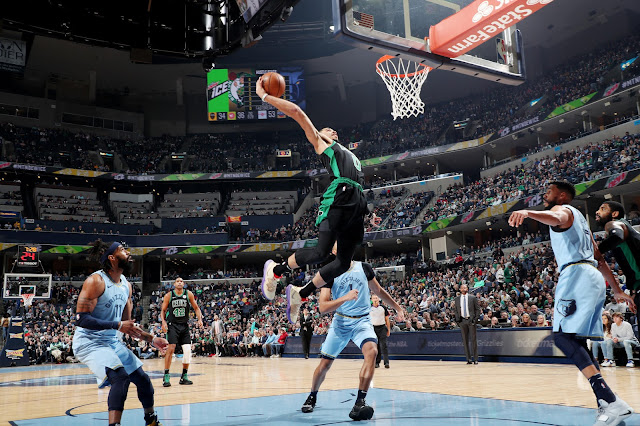 Jayson made the most of his 29 minutes of floor time. He only scored seven points, but it was an efficient 3-of-6 on field goals and 1-of-1 on 3-pointers. He hauled down a team-high eight rebounds, passed off for five assists, while getting four steals and blocking one shot. But it was this one play that not only became the JetBlue Play-of-the-Game, but illustrated Jayson getting the message and learning on the fly.

Tonight’s @JetBlue Play of the Game: Jayson Tatum doesn’t let the good ball movement go to waste by swooping in for the vicious putback jam! pic.twitter.com/BN0x1o7BES

Watch Jayson as Al Horford gets the feed. Tatum calls for the ball, but Al lets it fly instead. Jayson wastes no time heading to what might be an offensive rebound. It turns out to be a triple reward - an offensive board, an emphatic dunk for two points, and the Play-of-the-Game. That "little thing" of hustling for the offensive rebound paid huge dividends.

Brad Stevens said Jayson Tatum picks up concepts “as well as anybody I’ve been around.”

“As far as growing, I think that he’s got unlimited growth ahead. That’s a good thing and a responsibility.”

Tatum is getting the message - don't always try to be the hero and play selfishly. For a sophomore player at 20 years of age, he is learning quickly and it showed last night. "Unlimited growth ahead"? Sure seems it! Only seven points but the supporting stats are revealing. They are needed for Jayson's continuing growth.