I wrote prior to this season that this is make-or-break time for Guerschon Yabusele. His weight soared to around 300 pounds towards the end of last season, and that can't happen again. Yabu is a somewhat-rare case of an athlete that needs to lose both body fat and muscle to be a legitimate NBA player. But he showed some flashes in 16 minutes versus Marc Gasol and the Grizzlies. 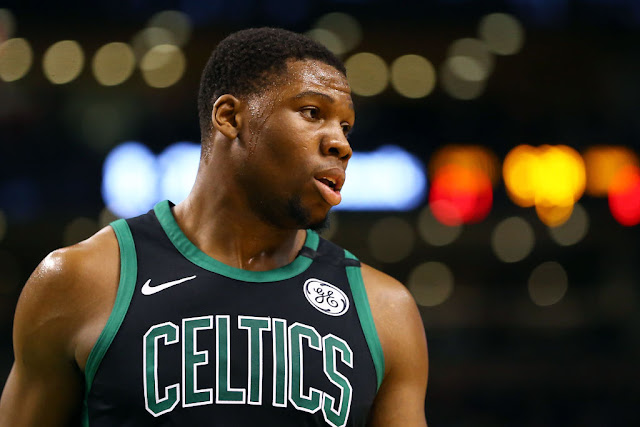 Just finished re-watching Yabusele’s 2nd half minutes. His combination of speed/awareness on D for plays like this were very impressive. pic.twitter.com/3VlofW8PTU

Yabu's individual defense on Gasol, and his team defense was certainly on display. He only notched three points on 1-of-3 shooting, but added four rebounds and two blocks. His Defensive Rating for last-game-played comes in at #11 out of 320 players on the court for 12 minutes or more. A solid accomplishment for one of the most well-liked Celtics in memory.

In the hierarchy of fitness goals, I believe gaining muscle is the hardest. Not for Guersch. He is loaded with hard muscle and could stand to lose some of it - along with body fat. If he can move as well as he does right now, think what a 30-pound loss of fat and muscle would do. And trust me - I almost never recommend that a client lose muscle, but I do broach the idea in Yabu's case.

Fat negates athletic performance, and excess muscle can have a similar effect. Carrying 260 pounds on his 6'8" frame at about 6% body fat seems about right. He has talent, skills and anticipation. We would see more of these qualities at a reduced weight. What would that look like? Take a look at the tweet below from 2016.

Not if youve seen this pic pic.twitter.com/dCZfjyQ70w

Danny Ainge picked up Guersch's contract for next season at roughly $3.1 million. The 2010-21 season remains a team option. Aron Baynes is out with a hand injury, and Rob Williams is nursing a leg issue. The timing is right for Yabu to step forward, and I hope he does just that. He was honest about being tired after 16 minutes of play, but that means he is out of shape. Fitness and weight management are 85-90% nutritional changes. Most of us would love to have Yabu's body fat percentage, but we don't play pro basketball. His first exercise should be pushing himself away from the table. His career depends on it.