Marcus Morris Sr. continued his outstanding play this season by joining the coveted 50/40/90 club last night against the Memphis Grizzlies, hitting all four of his free throws to join the lofty company this week. 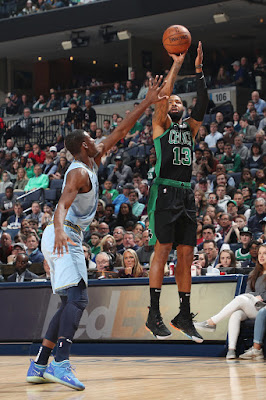 For those unaware, the 50/40/90 club is an informal but highly-regarded group of players who manage to average 50% shooting from the floor, 40% from three, and 90% from the free throw line. Many players have achieved briefly, and 35 games in, Mook's achievement is not a small one.

Only a handful of players have achieved the distinction of finishing a season in the club, a very short list indeed, including:

It's unrealistic to think Morris Sr. will finish the season with such gaudy numbers, but it's not out of the question - and with how the Boston Celtics have been struggling lately, they can use as close to that as they can get. Until then, cheers, Marcus - you're in the best of company, quite literally.
For more stories by Justin, click here.