Kyrie Irving is our Point God - and his sermons need attention


Yes, I know - some of Kyrie Irving's sermons are filled with obscenities, a very un-God-like display, but the eruptions are often necessary. When the preaching is followed by spectacular play on the court, his position as team leader should be unquestioned. Boston's 112-103 win over the Grizzlies last night strengthens the argument. 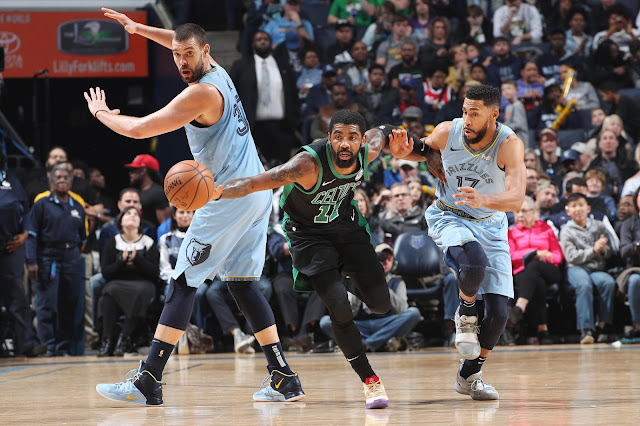 Opposing teams have the message now - the prime defensive goal is to take away Kyrie's game as much as possible. But his game is now complete, maybe for the first time in his career. Which part of his game do you stop?

The Celtics are best when Kyrie just lets his instincts decide whether to make the shots himself or make the pass. He doesn’t have to be overly deferential and force passes like in the 1st half, but be aggressive and make the right passes when they are there, like in the 2nd half

Kyrie played a team-high 34 minutes, and he also had team-highs on points (26), assists (13) and plus-minus (+14). He shot 50% from both the field and beyond the arc, while hitting all of his free throws. He only had four points at half-time, with Boston trailing 64-47, so he prodded his teammates, and himself, to a higher level of play. As indicated in the above tweet, Irving let his instincts take over, and they told him to stop forcing passes - take it to the hoop to cut that 17-point deficit - and make the right passes when they presented.

Kyrie Irving assisted or scored on 23 of Boston's final 25 points tonight in the fourth quarter.

It all worked. Take a look at Marc Gasol's startled expression in the top photo. No one ever knows what Kyrie will do with the ball. He has hinted that he is not totally thrilled with his current role with the team, and that may mean he often forces the pass to get teammates involved when he knows damn well he may be the better offensive option in many instances.

What doesn't this man do? Handles the ball brilliantly - scores virtually at will - often is the team's leading rebounder - makes spectacular passes - and has become a tough defender. The ultimate test of a true leader is whether that person practices what is preached. I see that in Kyrie, and he needs to be listened to.