Things are looking up for Jaylen Brown, the Celtics and the team's hopes for a Championship this year. I am sick of writing "It was only one game, but ..." every time Boston won. Now it's a 4-game winning streak after the Celtics convincing defeat of the Knicks. Jaylen came back last night and made an important statement. 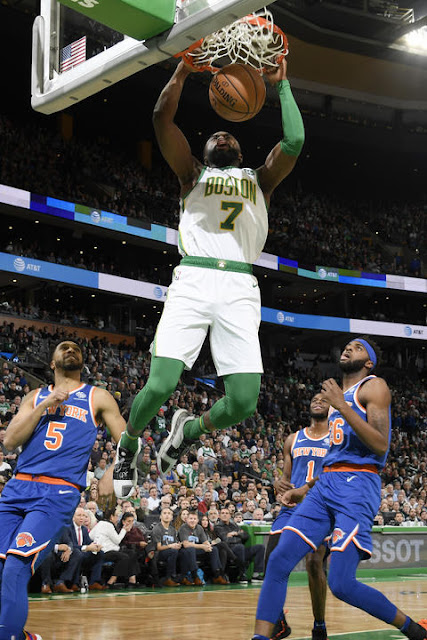 The above photo is appropriate. He was right at the rim, or close to it, most of the game. Injury? What injury! He came out of the gate attacking the rim, and it paid off big time. He was aggressive, and he was on a mission.

Jaylen Brown throws it over his head and through the hoop for the and-one bucket in tonight's @JetBlue Play of the Game! pic.twitter.com/gkDJk8rYzx

Brown played 25 minutes off the bench, scored 21 points on 70% shooting, and respectable 7-of-9 from the free throw line, an area where he has struggled in the past. The shot chart below demonstrates where his shots came from.

Jaylen Brown with a season-high 21 points on 7-of-10 shooting over 25 minutes.

His shot chart: Most everything inside the paint and at the rim. A season-high nine free-throw attempts as well.

In a recent article, Why I absolutely refuse to drop Jaylen Brown from my Fantasy teams, I proposed that much of Fantasy basketball translates to the real NBA world. I stuck with Jaylen in my two Fantasy teams, and last night he produced 24 Fantasy points for me. Beyond that, his 70% field goal shooting helps my rankings, and his 78% free thrown shooting doesn't hurt at all.

One stat that didn't help my Fantasy standings was his Defensive Rating - not because it was bad - but simply it doesn't count in Fantasy. But last night, he had the second-best (Terry Rozier was tops) Defensive Rating on the team.

It has been stated all season. This team is so packed with talent, the only path to a Championship is for the players to accept their individual roles and fulfill them. Brown has all the tools. Length, physique, athleticism, talent. He is a two-way player who needed to find his place on the team. In a playoff clash with the powerhouses of the League, his tool chest of assets is vital for Boston's success. It is only one game - there I go again - but I believe he has found his niche and his game. Fantasy is about to transform into reality. Nice game, Jaylen.