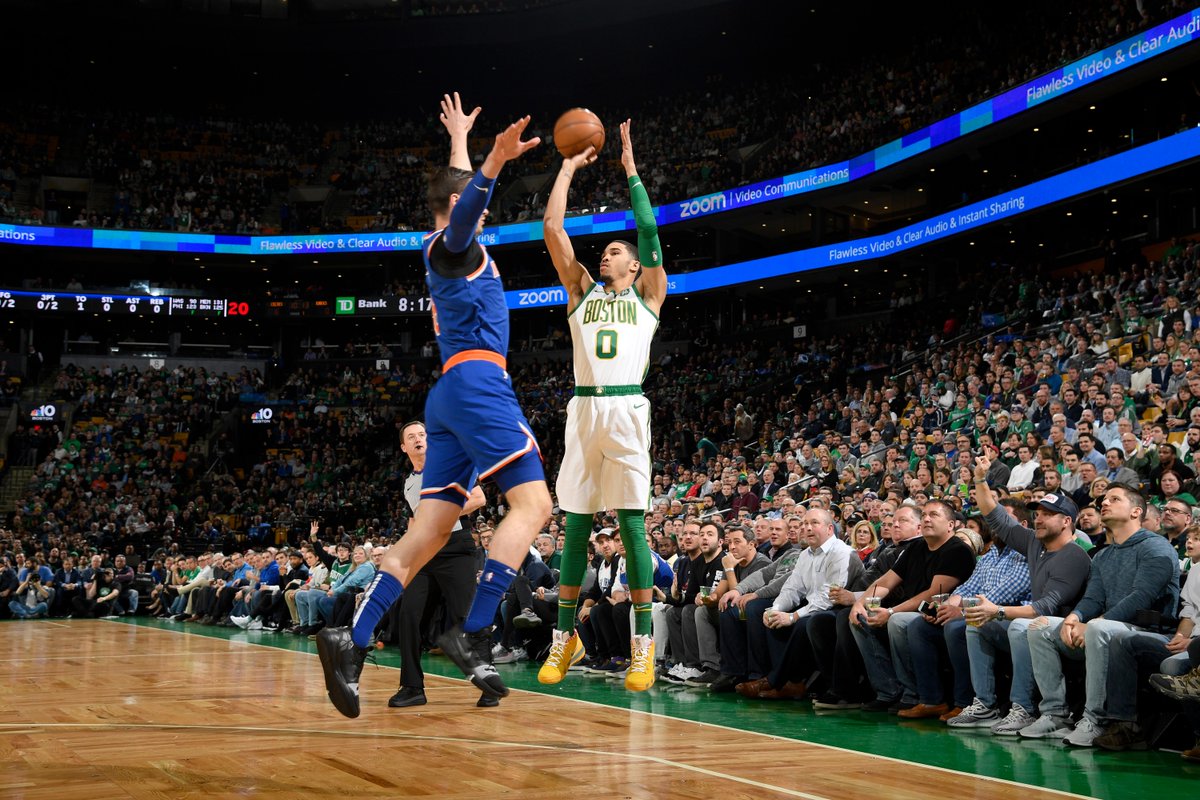 The well-rested Celtics took the parquet floor Thursday night seeking redemption against the 8-17 New York Knicks. After holding onto a double-digit lead for much of the match, Boston finally pulled away midway through the final quarter to capture a 28-point win.

Boston looked sharp to open their first contest of the week. Led by Jayson Tatum and Kyrie Irving, who combined for 16 of the team's first 22 points, the Celtics shot north of 60% to start the game.

Early on, the defense was leading to offense. The C's won the battle of the turnovers 6-0, which led to plenty of fast break opportunities and extra looks at the rim. One of the fast break plays was courtesy of Gordon Hayward and this beautiful set-up to Jaylen Brown for a dunk:

Despite effective offense for the home team, New York managed to match Boston's efficiency with a well-balanced attack.

Both teams were a scorching hot to start, combining for 18 for 25 from the field. With Brown and Hayward coming off the bench, the Celtics second-unit offense was far better than usual to finish the quarter on a high note.

After missing three games, Brown was the first player in the game to reach double-digit points when he recorded his tenth point just 30 seconds into the second quarter.

Boston's unselfish basketball continued, as strong off-ball movement and passing led to loads of buckets. The green posted 20 assists. To put that into perspective, they average under 25 assists per game. Three of every four field goals were assisted on in the half! This was largely due to Kyrie's 7 assists, but Hayward, Al Horford, and Marcus Smart all had three assists each.

To give you a little taste of the fluid overall movement on offense, here is the Smart-Horford ally-oop:

Doesn't get much easier than this. pic.twitter.com/lN0kRahJ6B
— Boston Celtics (@celtics) December 7, 2018

Speaking of Hordford, the big man had an excellent half of play for BOS. He shot an efficient 5-8 for 11 points, grabbed seven boards, dished out three assists, and was a menace on defense with three rejections at the rim.

Hordford and an excellent offense as a whole led to a season-high 69 first-half points. However, the Celtics' defense left quite a bit to be desired, as the Knicks put up 58 points themselves led by big men Enes Kanter and Noah Vonleh.

Boston maintained their double-digit lead through most of the quarter. Although the Knicks continued to fight, the Celts did not cave in. This squad has blown many of these types of leads in the third quarter, but Thursday night was finally different. Rather than panicking and relying on do-it-yourself offense, the team stayed patient and continued whipping the rock around until the best shot opened up.

Irving and Horford served as the anchors for the unit, shooting a combined 8 for 10 and making all the right plays. Perhaps the only forced look was this Kyrie pull-up three, which Celtics fans are surely more than ok with:

As shown above, the Celtics continued to take advantage of Knicks sloppy mistakes. They pushed the ball before New York's half-court defense could get set, leading to a whopping 26-4 edge in fastbreak points by the end of the quarter. This allowed Boston to further expand on their led heading into the final frame.

Following the trend from the first three-quarters of the game, the fourth quarter offenses for both units further regressed. The good news for the Celtics was that they already had the lead.

Halfway through the 4Q though, the Celtics finally managed to pull away. More Brown buckets a quick Boston scoring spurt pushed the lead into the upper-teens. This nice sequence, leading to a Terry Rozier three-ball, gave the C's their biggest lead of the game at 17:

The boys finished strong to capture their second-largest margin of victory on the season and thei fourth-straight win.

There were no shortages of impressive statlines in this one - seven Celtics scored in the double digits. Although Irving led the way with 22 points and 8 assists, Brown played a great game off the bench in his return with 21 points on 70% shooting. Horford had a tremendous impact with 19 points, 12 boards, three assists and four blocks. Tatum (17pts), Rozier (11pts), Marcus Morris (10pts), and Daniel Theis (10pts) all finished in double-digit scoring.