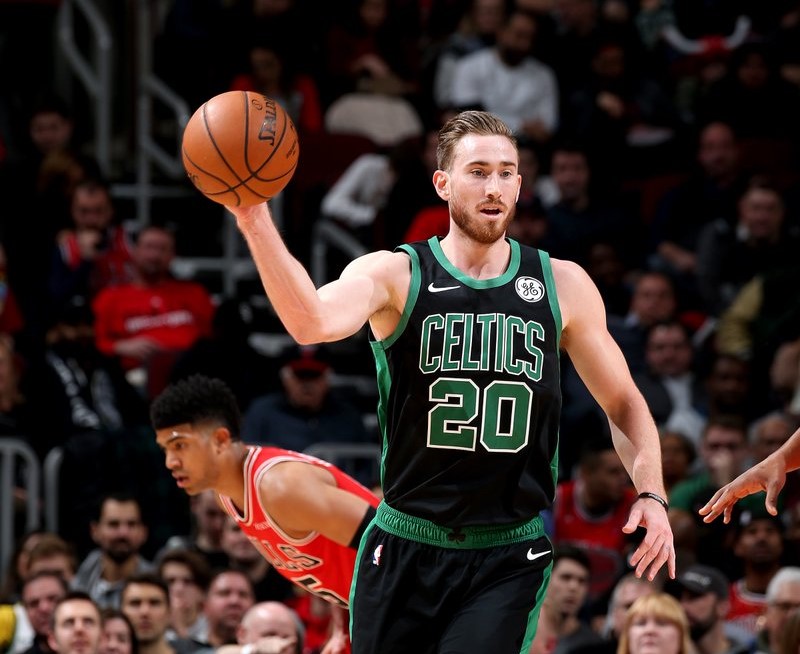 In search of their fifth straight victory, the Boston Celtics traveled to Chicago to take on the 6-20 Bulls without two key big men Al Horford and Aron Baynes. A great team performance led by Daniel Theis, Jayson Tatum, and Jaylen Brown saw the Celtics absolutely steamroll Chicago and win by over 50 points. It marked the largest road win in NBA histroy!

Tatum opened up the night scorching hot for the Celtics. The 19-year-old forward scored or assisted on not just the first nine Celtics points, but the first nine points of the entire game. This gave Boston a quick lead, and this Tatum step-back shot forced Bulls coach Jim Boylen to call an early timeout:

The Celtics had a whole lot more in store, though. Stellar defense and a high-powered offense put the Celtics up big in a hurry. Marcus Morris, in particular, played a big part in building the first quarter lead. His drive to the rim here capped an awesome 17-0 start for the green:

Jabari Parker momentarily halted the storm, as his free-throws snapped Boston's 17-0 run and brought the Windy City fans to their feet. He scored four quick points to give Chicago a pulse, but Morris and company continued their overall dominance through the end of the quarter.

Although the second quarter didn't bring quite as high-caliber of an offense, Brad Stevens second unit carried their strong play into the next frame.

Terry Rozier did the heavy lifting for BOS early on, scoring their first eight points of the quarter after hitting a pair of threes. Scary Terry had 10 points in the quarter off the bench, including this soft touch in the paint:

The Celtics shot north of 50% from three in the half and assisted on 15 of their 22 field goals (68%). Other than Tatum (10pts), it wasn't the households names that were powering the offense (although everyone was playing at a high level). Rather, it was guys like the aforementioned Morris (12pts), and Rozier (10pts), plus Theis (10pts). This led to a comfortable 21-point lead at the half.

Coach Stevens knew they couldn't get too confident. After all, the last time the Celtics opened the game 17-0, it was 2011 and they ended up losing the game. Stevens played one clip in the locker room of their very first defensive possession to remind them of the strength they needed to continue playing with.

Boston certainly did not let up in the second half. It was the same story, as the C's got stop after stop and punished the Bulls on offense. Stepping in for both Horford and Baynes, Theis continued having his best game of the season. The 6'8" big man matched his first-half output in the 3Q alone, scoring 10 more points with some versatile scoring.

Vanilla Theis made both of his three-point attempts but also wasn't afraid to put the ball on the floor and attack the paint:

In addition, Tatum continued to be a focal point of the offense. The sophomore poured in eight more points and finished the night without missing a three (4/4).

This further expanded the Celtics lead to 33.

Boston had the luxury to go on cruise control for the final 12 minutes of the game, after already leading by 30+ points. However, they still managed to further steamroll this Bulls team. Brown led the way in garbage time, putting up 13 of his 23 points in the final quarter.

Despite the lopsided score, Brown kept his foot on the gas pedal:

The game's player of the game, Daniel Theis, capped off a career night with a few more highlight plays down the stretch. Theis added a handful of blocks, a few more boards and assists, and yet another big dunk.

Boston messed around in the fourth quarter and found themselves with a whopping 56-point win, the largest margin of victory in the Brad Stevens era. Brown (23pt) snuck by Theis as the game's leading scorer, but the latter finished with a statline of 22pt, 10reb, 5ast, 4blk, and a team-best +50 plus/minus.