Celtics humiliated on the boards two games in a row


Rebounding is just plain effort! Well, once again it was not there for the second game in a row. I wrote about the board-debacle versus the Suns (56-37), and here we go again with Boston trailing Milwaukee in the board war, 56-37. If this wasn't addressed in the team's private meeting following the loss, it should have been. 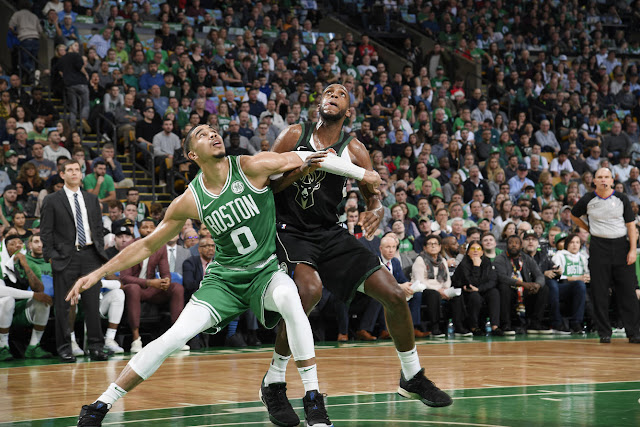 Kyrie Irving was Boston's top rebounder with nine, followed by Jaylen Brown with seven and Jayson Tatum and Daniel Theis with five each. Surprisingly, the Time Lord, Rob Williams, had no boards, and Terry Rozier only collected one.

For Milwaukee, Malcolm Brogdon and Kris Middleton took honors with nine rebounds apiece, followed by Giannis Antetokounmpo with eight. There simply is no way a team can hope to win games with a 19-rebound deficit in consecutive contests.

I miss the max effort Celtics.

One other point. How in the world does a 6'3" point guard, bestowed with the task of running the offense, turn out to be the Celtics top board man. We are talking, of course, about Kyrie.

My CelticsLife Race-to-the-Title reveals just how unacceptable this is. I asked for the name of the top rebounder in the Celtics-Bucks game, and no one got it right. The top guys were Irving, Brogdon and Middleton - all with nine boards. I also asked for the Celtics rebounding margin. It turned out to be minus-19. The closest guess was minus-10. Not many fans expected such a negative showing.

This team needs to rebound - in more ways than one. Thus far, I see consistent, efficient production from only one Celtic - Kyrie Irving. A team with three All-Stars and two budding youngsters should be better that they have shown. It starts with maximum effort, and slicing into that 2-time, 19-rebound deficit will be a start.