The Celtics 120-107 loss to the Bucks last night was Boston's third loss in a row. The players were asked about the nature of the meeting, and they had little to say. I doubt that was the case within the meeting itself, and Kyrie Irving has earned the right to voice his usual strong opinions - hopefully with some well-timed obscenities. 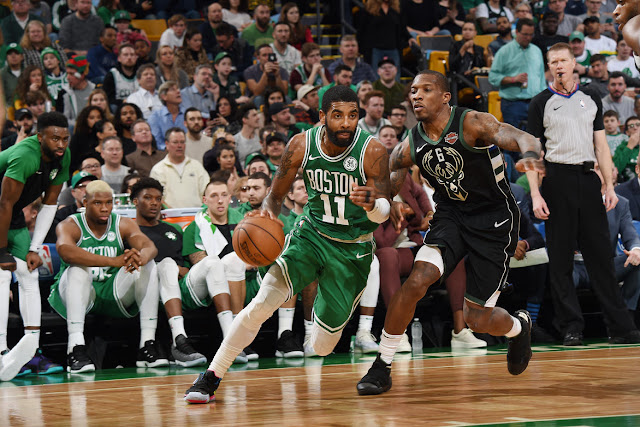 Jaylen Brown won’t reveal many details, but said the Celtics met as a team after the loss to try to get on the same page.

Of course Jaylen Brown had a good individual game (21 points, seven boards, four steals). I finally had to drop him in Fantasy. A huge game by my dropee usually results. But his comment to the media told us nothing.

Kyrie Irving on the meeting: “That’s none of your business.”

Now we are getting somewhere. "None of your business" might possibly indicate Kyrie is pissed. And he should be. He has almost literally carried his team at times, with various teammates stepping up their game on occasion. We obviously have no Kyrie quotes from the meeting, but if there were obscenities, we can expect a winning streak. His "S--- my d--k" to a Philly fan and "F--- Thanksgiving" to the media were followed by winning streaks.

Kyrie Irving says “consistent cohesion” is missing from the Celtics: “I literally can do anything I want out there any time I want. But at the same time, it’s what can I do for my teammates to be more successful?” pic.twitter.com/RHPUItCPmP

This is what it is all about! We have seen it on the floor. Kyrie goes anywhere he wants - does anything he desires - and usually finishes off a good play via drive, jumper or pass. During the 3-game losing streak, he is averaging 23.3 PPG, 7.3 RPG, 7.0 APG and 2,3 SPG. He is shooting 44%/39%/88% from the field, 3-point arc and free throw line, respectively.

Love him or hate him, Kyrie has been very consistent, and he has been very good. The "consistent cohesion" he spoke about would be his teammates following his lead. It is obvious Kyrie is frustrated by some hero-ball and iso-plays with a lot of time still on the clock. Jayson Tatum has been guilty of both at various times.

The Celtics got trounced on the boards, 55-36, once again last night, and Irving was the top rebounder with nine. He also played the most minutes (38), passed off for a team-high seven assists, and had the highest plus/minus of zero. If he didn't throw out a few obscenities at that meeting, he should have. He has earned the right - and we need a winning streak.