By eyeball test or the numbers, Marcus Smart needs to be on All-Defensive Team


Marcus Smart is in his fifth year in the League, and he has never been on the NBA All-Defensive Team. That needs to change. Yes, I get it. Analysts still don't know how to define Marcus, and neither do I. But one thing is certain. He is a tough-as-nails defender that opponents hate to face. 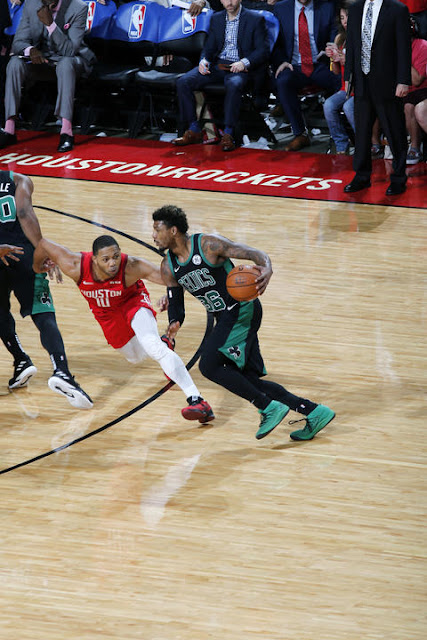 Smart ranks eighth in the NBA in steals with 1.8 SPG, but that is only one traditional stat. I am going with Defensive Real Plus Minus (DRPM) on this one. As opposed to traditional plus/minus, RPM takes into consideration the contribution (or lack thereof) of teammates and opponents. Where does Marcus sit in the standings? He is rated number one among point guards. He is ranked 25th among all NBA players, and only one other guard (shooting guard Danny Green) is in that top-25. The other 23 are all centers, power forwards and small forwards (per ESPN's Steve Ilardi):

RPM is inspired by the same underlying +/- logic: If a team outscores its opponents when a player is on the court, he's probably doing something to help his team, whether or not he's putting up big numbers.

Drawing on advanced statistical modeling techniques (and the analytical wizardry of RPM developer Jeremias Engelmann, formerly of the Phoenix Suns), the metric isolates the unique plus-minus impact of each NBA player by adjusting for the effects of each teammate and opposing player.

The RPM model sifts through more than 230,000 possessions each NBA season to tease apart the "real" plus-minus effects attributable to each player, employing techniques similar to those used by scientific researchers when they need to model the effects of numerous variables at the same time.

RPM estimates how many points each player adds or subtracts, on average, to his team's net scoring margin for each 100 possessions played. The RPM model also yields separate ratings for the player's impact on both ends of the court: offensive RPM (ORPM) and defensive RPM (DRPM).

I found the mathematical exercise interesting, but the eyeball test merely confirms the numbers. Marcus may be an undefinable enigma, but he is one of the top defenders in the NBA and needs to be recognized as such. He takes each defensive assignment like he has been sent on a rescue mission to save his team - and maybe, in part, that is what he does. He is relentless, fearless and a downright pain-in-the-ass for the guy he is covering. Marcus has already stated that the All-Defensive Team is not important for him. Maybe so, but I do know it's important to me. He needs to be there.