What the Jimmy Butler trade means to the Boston Celtics


For a team that is still finding its way, news that the path forward just got harder certainly isn't welcome news - or is it? 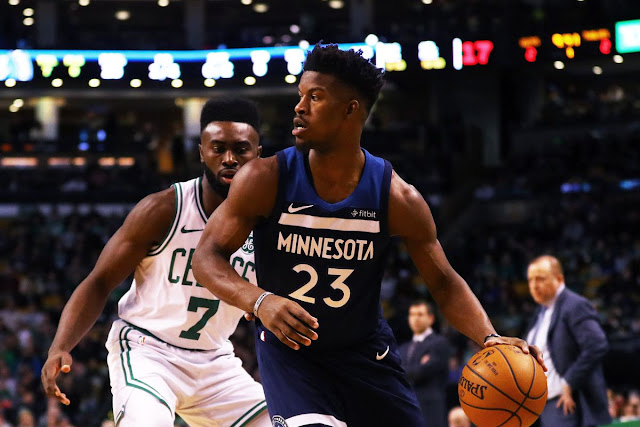 After digesting today's reports of Jimmy Butler getting dealt to the Philadelphia 76ers, I decided to think about what it means to the Boston Celtics short and long-term futures. The deal itself, which sent Jimmy and Justin Patton to the Minnesota Timberwolves in exchange for Dario Saric, Robert Covington, and Jerryd Bayless along with a 2022 second-round pick.

The deal, which may seem cheap for a top-twenty NBA player, was definitely discounted because of the risk involved, whether talking about Butler's comparatively high usage playing under coach Tom Thibodeau, or the fact that his intention to re-sign with the 76ers is nothing more binding than a handshake until this summer.

If Butler, widely known for being intense to the point of being hard to play with, should prove a problematic fit, the risk is not small. Philadelphia already had a depth problem before this deal went down, struggling to balance shooting and even competent backup play when the starters sit - sacrificing two key roleplayers for Butler's services may make them even worse in that regard.

The Sixers were 21st in three-point shooting prior to the Jimmy Butler trade at 33.6 percent. And that's only gonna get worse without Dario Saric and Robert Covington around.

Time for Philly to strongly consider a Kyle Korver deal.

It's hard to believe that Jimmy would make them bad enough to worry much about to miss the playoffs, and when rotations normally shrink, they may actually improve their footing as a result, but with the East looking stronger than it has in a very long time, playoff seeding may also be a factor.

Longer-term, the move significantly constricts the 76ers ability to grow with their team, as the only first-round pick still possessed by the franchise besides their own is the Miami Heat's 2021 first rounder, and, eligible for a five-year, $190 million deal, re-signing Butler effectively locks the club into its current roster.

The Sixers and Jimmy Butler reportedly expect to agree to a contract extension this summer https://t.co/WI18URjtMX pic.twitter.com/Aj7oBUWYhP
— Dime (@DimeUPROXX) November 10, 2018

Ben Simmons has only one season beyond this one on his rookie contract, and with JJ Redick only signed to this season (at age 34, no less), the 76ers will be forced to rely on seasonal exceptions and buyouts to provide depth in a league of teams upping the ante with tools the team just doesn't have any more, giving them precisely one shot at adding effective talent this summer.

If Butler did leave, they could open up a little more than the cap space necessary to sign a max player, but the ghost town of a bench and now-bare warchest of assets would remain a considerable impediment.

I won't say it's out of the question that this team could have sustained success in even an improved Eastern Conference, but with Butler already 29 years old himself, even the thought of retaining the star player could go sideways, given two of Philly's new big three are no stranger to sitting on the sidelines for a quarter of the season or more.

Ultimately, the 76ers decided to gamble big, and it could pay off. It could just as easily play into their divisional foes hands, however - only time will tell.