Stevens blames himself for Celtics' woes 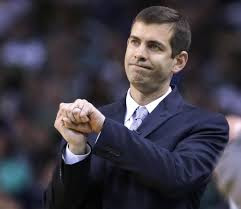 What characteristics make for an elite coach in the NBA ranks -- or any level for that matter? Integrity. Ability. Adaptability. But as Boston Celtics head coach Brad Stevens recently showed after a 1-4 road trip where his should-be-dominating-but-are-instead-often-being-dominated Celtics were once again down big early, true coaches shoulder the blame for defeat, while showering the praise to the players during times of success.

Which is precisely what Stevens has done during his entire tenure as the lead clipboard man for the good guys in green.

OK, so what's wrong with the Celtics exactly? Ohh, where to begin.

Gordon Hayward is having trouble getting his groove. Which appears to be throwing off the other players.

The young cavalry seem to be out of position a lot defensively, always seemingly a step or two slow contesting shots.

This once top-ranked defense is no more. Even Marcus Smart has looked average on that end of the ball.

Al Horford, the always calm, cool, collected vet seems to be overthinking things as well. Look no further than late in the 4th quarter versus Portland. Down only 4, Horford corralled a Kyrie Irving miss and instead of attempting to stuff it home or at least lay it in, he kicked the ball out to the wing for a Jaylen Brown 3-point attempt.

Which leads me to the next point. Boston needs to stop this incessant 3-point barrage. We're not the Warriors, folks. We have some guys who can knock down shots, but that's not who we are.

Terry Rozier III, while saying all the right things, isn't making all the right plays. He appears to be in a "well, I didn't get a shot up for the past few minutes, so now I'm going to take a bad shot" mode. Not saying that's true, just pointing out what it looks like.

These are just a few of the main issues I, a mere mortal, see with my beloved Celtics.

However, Brad Stevens sees it another way.

I respect the hell out of Stevens for wanting to point the finger at himself, but I can't. You can lead a horse to water, after all, but you can't make it drink, right?

Second year phenom Jayson Tatum, coming off a career-hight 27 against Portland (it should've been much more if the Cs got him the ball more -- yet another issue) agrees.

How say you, Celtic Nation? Do you think Stevens is partially to blame for this unexpectedly disappointing start to the season? Let us know in the comments below.