Celtics current and future leaders may be about to take control


Kyrie Irving came to the Boston Celtics to be a productive leader and prove that he can be a franchise player. Jayson Tatum is still too young and inexperienced to take on such a role, but look for him to take on more of a leadership role sometime in the future. Both of them seem to be ready to become what we have expected of them this season. 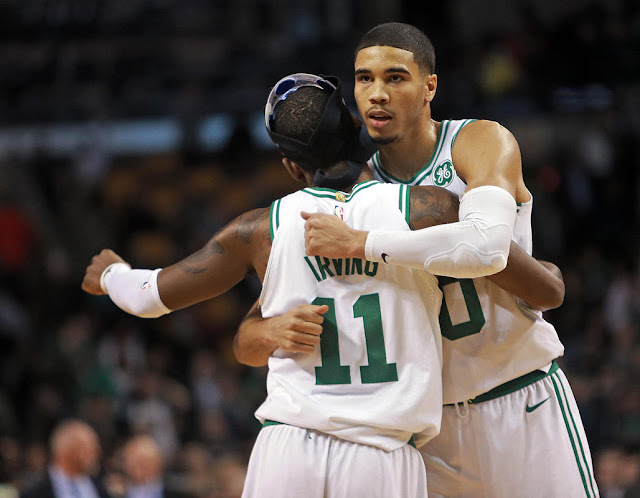 The ideal leader of an NBA team needs to have a swagger to him that is backed up with efficient production on the court. Larry Bird is a prime example. He lived basketball and was the undisputed leader that pushed his guys to their limits and could be relied upon in the clutch. It can be argued whether the leader of the later crew was either Paul Pierce, Kevin Garnett or both, but they fit Larry's command-of-the-troops-role quite well.

For the present, it looks like Kyrie is the leader and driving force for this Celtics team, and Jayson showed leadership qualities when he unhesitatingly took down Marcus Smart who was hell-bent on destroying J. R. Smith. After some down times, these two are starting to come around, and that may make all the difference.

Full one-on-one w/ Kyrie Irving: On challenging himself, embracing being a face of Celtics, at times “very lonely” leadership, parting with the Cavaliers, his future and more -- “It almost scares me in terms of the potential of me at the start of my prime.” pic.twitter.com/ouoRmakywZ

For Kyrie Irving the next three months will be vitally important for his future and that of his team. In his second season with Boston, if he plays the leadership role of Bird, Pierce and Garnett and at least gets into the conversation for League MVP, he will be a fixture in Boston. If not, we may see Danny Ainge pull the trigger on a mid-season deal involving Kyrie.

As for Jayson, his play may have bogged down for a short while, but he is definitely a superstar-in-the-making. And possibly the team leader in several years. The Celtics are back home for a three-game stand, and the stage is set for a resurgence. Think about clicking on this link and joining our CelticsLife Race-to-the-Title contest. Just another way to get more-deeply involved in a season that may end in a Championship.