I started following Duke's Zion Williamson as a high schooler in South Carolina. I have followed him recently because of Danny Ainge owning Sacramento's first-round pick. Now I am tracking him because he looks like a once-in-a-decade college player that will dominate in the NBA. 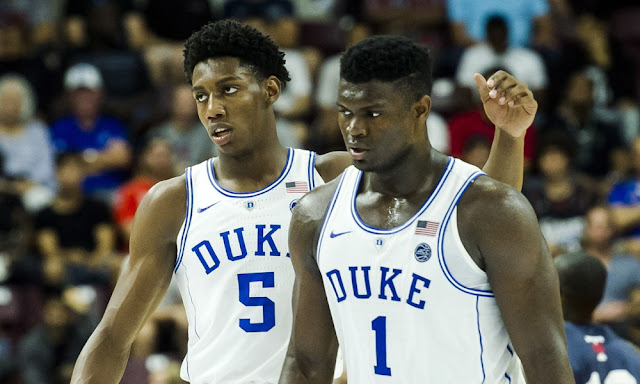 This kid is an absolute physical freak that Warriors coach, Steve Kerr, compared to Lebron James - and then begged Adam Silver not to fine him for his praise of Williamson. The video is worth watching and Steve speaks only briefly before zipping his lip. The adulation continued on the ESPN video below, and there are some excellent Zion highlights in it.

Williamson notched 27 points, 16 rebounds, four assists and six blocks in a victory over Army. He has handles, speed, physique, strength, power, agility, athleticism and much more. If you get the chance, take a look at him. I have been writing about him for close to a year now and may be for years to come. Lebron and Shaquille O'Neal were comparisons made in the ESPN video. That seems legit from what I have seen so far.