The Boston Celtics, minus Al Horford (rest), and Jaylen Brown (back), imposed their will against the rebuilding Cleveland Cavaliers with a 128-95 win on Friday night. "Gino Time" was back in the TD Garden, and the C's disposed of one of the league's basement dwellers with their biggest blowout of the season. With a matchup against the Minnesota Timberwolves less than 24 hours away, an easy win was just what the doctor ordered. 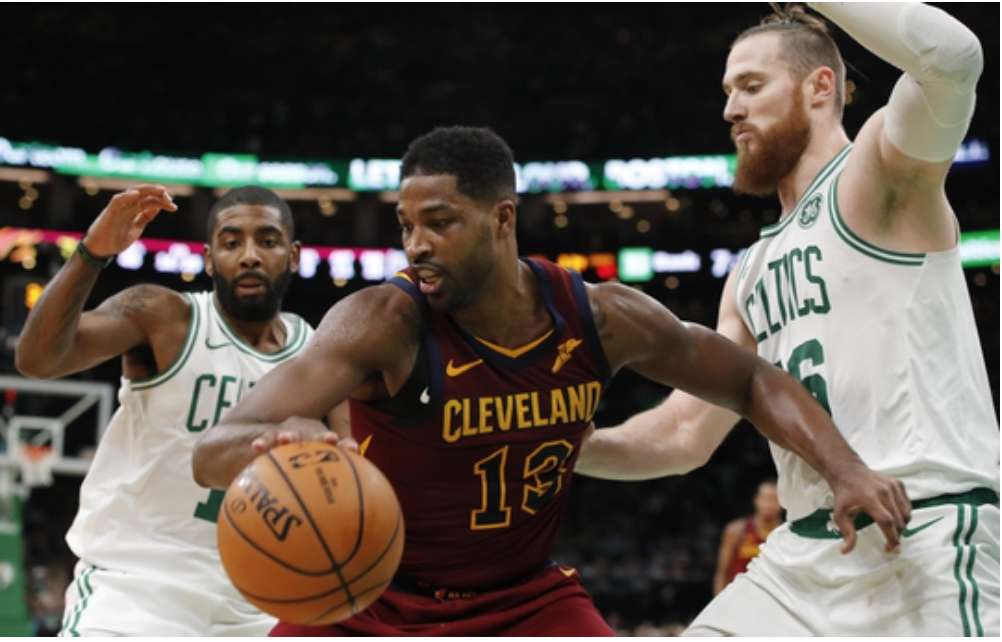 Kyrie Irving led all scorers with 29 points on an efficient 11-15 from the field, including 5-7 from three point range. Six other Celtics players scored in double digits, highlighted by 14 points off the bench from Gordon Hayward and 15 points from Marcus Morris. Jordan Clarkson led Cleveland with 16 points off the bench and newly-acquired Alec Burks had 14 points, six rebounds, and 4 assists.

Take it with a grain of salt considering it was a matchup with the Cavs, but the additions of Marcus Smart and Morris into the starting lineup have given this team a boost for the second game in a row. A team that was repeatedly plagued by slow starts has seemed invigorated with the energy and grit of Smart/Morris. Smart snatched the first pass of the game that Cleveland made, and Morris' versatility and shot making has helped the offensive flow.

Hey, another good start for the Celtics.

After the Celtics jumped out to a 9-2 lead, the Cavs ripped off a 9-4 run to make it a one-possession game, but two quick threes from Irving and a pull-up jumper from Hayward stretched the lead out again. Irving was in his bag early against his former team. He had 13 points on 5/6 shooting in the first quarter and showcased his entire offense arsenal along the way.

Hayward continued his solid play since moving to the bench. Presumably taking to heart the pep talk that Irving gave him at their last practice, Hayward came out of the gates looking for his shot. He knocked down three mid-range jumpers and even attempted a backdoor lob play out of a timeout that had Celtics fans everywhere holding their breath.

While Hayward was finding his offense, Clarkson was keeping the Cavs in the game. Ten points on nine shots in just 11 minutes off the bench proved once again that Clarkson can be a potent scorer at times, but not much else. As the Celtics settled for tough shots with Irving on the bench, Tristan Thompson, Clarkson, and the Cavs took their first lead of the game late in the second quarter. But the C's snapped back to reality and went on an 15-5 run to end the half, thanks in large part to some ball-handling wizardry from "Uncle Drew" himself.

Boston took a 62-52 lead into the locker room and were looking for a strong third quarter to put the game away early on the first night of a grueling, cross country back-to-back.

And a hot start was exactly what the Celtics got. The C's scored 17 points in the first five minutes of the third quarter and extended their lead. Irving drained another deep three, Aron Baynes added a few dunks, and Morris scored eight quick points out of the halftime break. Boston also forced the issue and got to the free throw line early and often in the third, something that has not been the case very much this year.

Sensing that a fourth-quarter blowout on the horizon, Irving continued to push the pass and score at will on rookie Collin Sexton. Hayward and Terry Rozier picked up where the starting unit left off, a combined 13 points in the third quarter, and the Celtics stretched their lead to 29 points.

Hayward playing tonight like he took Kyrie's advice to heart. 14 points in 18 minutes with a lot of smart aggression mixed in.

The fourth quarter was mainly trivial, with Smart being the only Boston starter to see any minutes. The Celtics haven't had too many dominant wins this year, so it was nice to see players like Rozier, Semi Ojeleye, and Daniel Theis get some extended run. Robert Williams threw together some highlight plays, finishing an alley-oop and blocking s shot into the Earth's crust. PJ Dozier even got some minutes, scoring seven points in his Celtic debut.

The competition hasn't been strong over the past few games, but we are starting to see glimpses of a more consistent, dominant Celtics team. Players are starting to find their roles, the new starting unit has been excellent, and the offense is starting to click. Boston won't have to wait long to get back into action as they take on the surging Minnesota Timberwolves on the road on Saturday night at 8:00pm.