Kendrick Perkins wants back in the league, and has reportedly reached out the Boston Celtics about it, per the Boston Globe's Gary Washburn..

What sounds a little crazy at first, given Perk's time as an impact player on-court has been absent for some years now may actually not be the worst idea, if you believe in Kyrie Irving's musings that a 15-year vet could be what an ailing Boston roster needs. 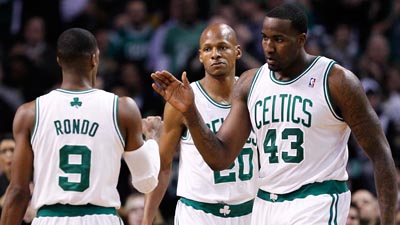 Of course, there would need to be space for any sort of locker-room presence to actually happen, but it's not out of the question. Should the Cs decide getting under the tax close to the deadline a good idea, players who have not been adding much value this season could find themselves shipped into another team's space, opening up roster spots, and players with value might be moved for picks or fewer players if the team remains in a funk close to the deadline.

Kendrick Perkins said he wants to play in the NBA this season but said it would be his last year. Waiting for 10-day opportunities to open up in January and he has reached out to #Celtics pic.twitter.com/IQMwl9cmz7
— gary washburn (@GwashburnGlobe) November 28, 2018


Another benefit of signing veteran players, especially for taxpaying teams, is that the league partially reimburses teams who sign veteran players (done to discourage teams from only signing younger players) to minimum deals, lessening the cap hit a team would have to take. In the case of Perk, we'd be looking at a total salary of $2,393,887 for a one-year deal, but Boston would only have to pony up $1,471,382.

Too many things would have to break right for Perk to have a very realistic shot at another stint in green and white, but it's not out of the question, either. More likely, he finds his way to some other squad in need of a stabilizing presence, and when it comes to that, Kendrick fits the bill to a tee.