If you're a Boston Celtic and Abby Chin is using your fan-created nickname in live broadcasts, you'd better like it, because it's clearly sticking. 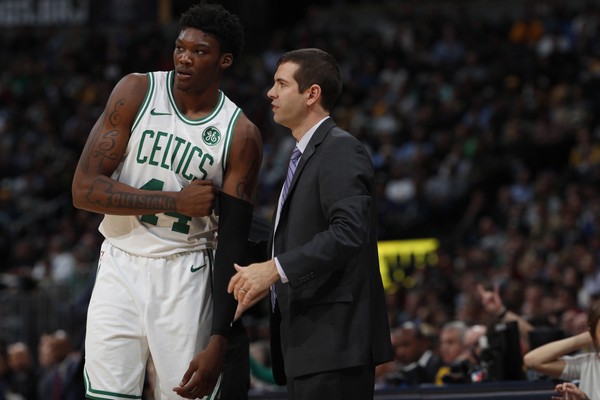 And now that we're talking about Robert "T I M E L O R D" Williams, can we get the man some meaningful minutes? Yes, I know he still makes the occasional rookie mistake, but...he's a rookie, and one whose energy changes the complexion of a game  almost as soon as he steps on the court.

Don't believe me? Check the following sequence from Boston's win against the New Orleans Pelicans, where Williams flushed home a lob after a gorgeous spate of ball movement late in the game, once victory had been all but secured:

This is not the confused, deer-in-headlights look you see from most rooks, even, often, those taken with high picks; Robert knows exactly where he ought to be on both ends, and rarely makes mistakes in his limited opportunities to date.

In fact, he's yet to miss a shot this season, and while that's mostly attributable to the very low amount of burn he's had this year, averaging just 3.4 minutes per game over just a third of the Celtics' games this season, it's worth noting he's also yet to have a turnover, something almost all rookies excel at with any floor time.

Such anomalous indicators make projecting what he'll look like with real rotation minutes under his belt fraught, but it's not unreasonable to combine the limited sample we have to work with and the eye test to arrive at the conclusion that this man deserves a shot at ten minutes a night or so until he shows he needs more time with the Red Claws...or a bigger role with the parent club.

While projecting upward from such a tiny range of games is unreliable, Williams currently leads the team in defensive rating and offensive rating, and though the latter is absolutely distorted by the sample size, I maintain it's hinting at a golden goose in Brad Stevens' lap he really ought to check for eggs.

I don't know if there may be lingering concerns about the prospect potentially having success on court before they believe he's elevated his professionalism to match, wary of becoming dependent on a young talent who showed a few minor flags early on, but I've always thought those concerns were overblown, even if they gave us an awesome Dr. Who-themed nickname for one of our players.

My theory on the near-practice center apartment is that it was bigger on the inside, after all.

I don't know about y'all, but I'd lose my shit if this was ever played as hype music at a game, Let Me Tell You. Can the guy get some minutes already?