In an article I wrote for CelticsLife, my readers were quite vociferous about Celtics players constantly driving to the hoop, only to pass out to the perimeter for a frequent 3-point miss. This comment on the article came from reader, Brian Fleming:

What the hell are they doing ALWAYS passing it out to the perimeter EVERY time one of them drives to the hoop and the defense collapses on them? Take the goddamn shot. Don't pass it. A five footer is a bunny to just about everyone, so pros should always be looking to take that shot or get fouled doing so. The Cs, however, always kick that for a three, which they tend to miss. 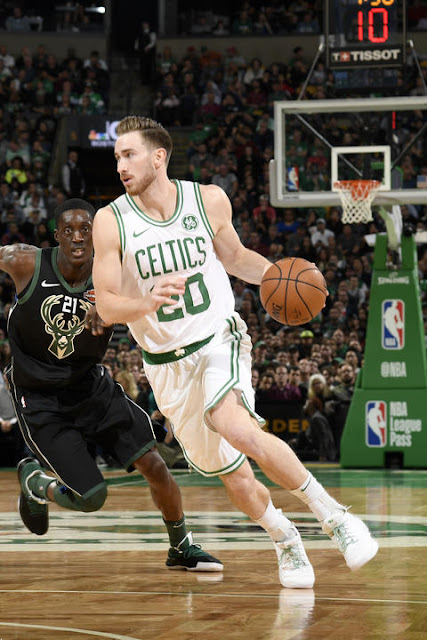 Working his way back from a devastating injury, Gordon Hayward's defense, passing and rebounding seem solid. His offense is not - not yet. As Fleming, and many others have indicated, Gordon often drives to hoop and chooses to pass it back out to a teammate rather than attempting to finish at the rim. And his shooting from distance definitely needs work.

Gordon Hayward’s defense has looked better, but his finishing continues to be a work in progress. I talked to him about why one came back faster than the other. https://t.co/9XnXwBm5xL pic.twitter.com/FT4hsQmMcE

Gordon knows the areas in which he struggles (per MassLive's Tom Westerholm):

Perhaps his worst struggles have been in two of the most important areas: At the rim (55 percent, 28th percentile among wings) and behind the arc (28 percent, 11th percentile). In his last healthy season, Hayward shot 67 percent at the rim and 40 percent from three.

The shots at the rim seem more concerning, because the only way to improve is to keep hammering away at a thing that doesn't feel like it's working. The Celtics have been putting Hayward through workouts with pads, where he tries to finish at the rim while assistant coaches smack him around. He said whenever he gets an opportunity during offensive drills or scrimmages, he dunks to remind himself to be forceful.

"It's like a mental confidence of jumping off that leg and feeling like I've had a couple times where I've gone to the rim and I haven't finished the way I'm used to finishing," Hayward sad. "So then that kind of knocks my confidence down a little bit. And then the next time I go in there, and I bail out and pass it, which I can't do. So it kind of goes back to like I said, I have to be able to go in there and get hit and feel fine doing that. That's just something I need to practice out here, but really I just need to try doing it."

Gordon is not the only Celtic having trouble finishing at the rim. It seems to be a team-wide issue, with at least one exception being Kyrie Irving. He has no fear of driving to the rim with his hesitation, jackhammer dribble and finishing with a variety of moves that drive defenders crazy.

There is little doubt in my mind that Hayward will correct both deficiencies with more games under his belt. The 3-pointers will fall, and the finishes at the rim will come around. We can't forget that his severe left ankle injury came on a lob pass where he was fouled while airborne. His tenuousness happens because a possible repeat of that sequence is always on his mind.