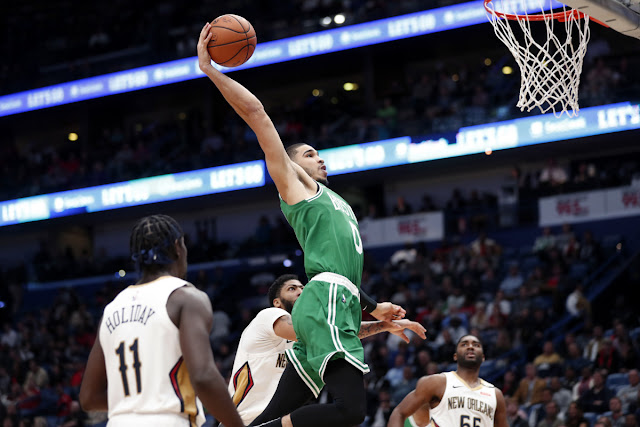 Last night was the 21st game of the season for the Boston Celtics. However, after exemplifying their historically patented toughness and bravado on both sides of the ball for a full 48-minutes, something we hadn't seen all year, one can argue that it was their first game.

Simply put, this is how they should’ve played all year.

It may not have looked it, but last night was a true test for the Celtics. Sure, the New Orleans Pelicans aren't exactly the Golden State Warriors, but after losing to teams Boston would normally run through, nothing has been a given. Add into the mix having to deal with the Mr. Athletic Anomaly himself, Anthony Davis, along with vastly underrated two-way guard Jrue Holiday, the Celtics were set to have their hands full.

Enter Marcus Smart into the starting lineup. Mr. Dive-On-Every-Ball. Mr. Intensity. He may be closer to David in height, but his heart makes Goliath look like a dust bunny. He's the one guy who would willingly dive into the mouth of famished shark if he thought it would help his team. Which is why he's worth every damn penny he's getting. But I digress.

The key to last night's victory was setting the tone early. They communicated on defense, switching effortlessly. Their hands were live, their feet were swift. And they converted 22 Pelicans turnovers into 15 huge points. Little reminder: we won by 17.

The Boston Celtics also did something they normally did last year, but rarely showcased during this 2018-2019 campaign. When the opposition attacked with a barrage of uppercuts, the Celtics didn't hit the canvas. Instead, Boston bobbed and weaved, countering with their own relentless fists of fury.

Look no further than Boston not getting shook every time Nikola Mirotic did his best Steph Curry impersonation. Or here (see below), when the Pelicans cut a 20-point deficit to 9 with about 6-minutes to go in the 3rd. The Celtics called time, then came out of the huddle, answering with 3 consecutive 3-point plays to push the lead back to 18.

Brad Stevens says of the win, “Even when they made runs, we answered it, time and time again.”
— Boston Celtics


So, what's the moral of the story? No one cares that you're the Celtics. No one cares how close you came to a Finals appearance last year. No one is handing this team anything. All Boston needs to do is duplicate what they did last night -- non-stop defensive intensity, crisp cuts and offensive execution, and suddenly, as Brian Scalabrine stated last night when talking about always playing with effort and making the right play, the "basketball gods will reward you."

We need those rewards, seeing as we're currently 6th in the East, but they'll only come when 100% is given 100% of the time.

Was this the turning point for the Celtics? I think so. Let us know what you think in the comments below.