It looks like we've finally seen the Boston Celtics we were all expecting, even if there's still some work to do. 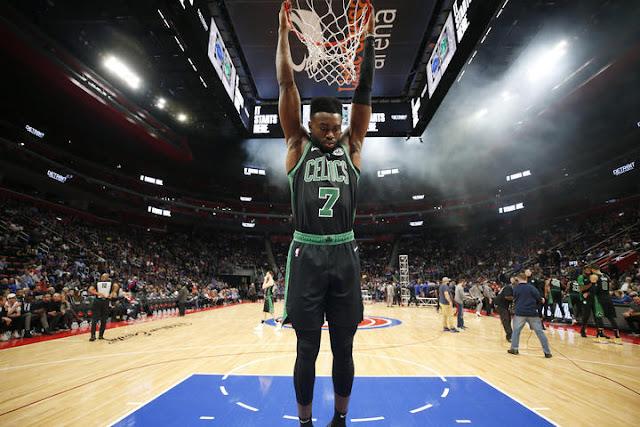 The Celtics spanked the previously-undefeated Detroit Pistons, who'd been flourishing under new coach Dwane Casey and revitalized big man Blake Griffin, but Boston's top-ranked defense shut him and his team down last night.

Speaking of revitalized players, the last of the Cs' expected starters broke out of his early-season funk, with Jaylen Brown scoring an efficient 19 points for the team, and Marcus Morris continued to shine with 18 and 8 boards.

Daniel Theis looked as good as he has maybe ever has in green, dropping 17 with 8 rebounds of his own, and Gordon Hayward is rounding into solid shape with his 15-point, 5-board evening.

Terry Rozier had a quality showing as well, putting up 14 points and - you guessed it, 8 rebounds - as well, and even the T I M E L O R D (better known as Robert Williams) got in on some quality minutes, logging three (yes, three) blocks, two boards and one thunderous oop in only eight minutes.

After the game, coach Brad Stevens had high praise for Jaylen, and Kyrie Irving had some choice words given he only scored three points on the evening.

Brown related how much better he's feeling with this game in the rearview mirror, and Mook spread the love by giving the Pistons some love for trading him into his current situation.

It finally seems like the Celts are where they want to be, saying the right things and getting the desired results. Don't be shocked if we see a very  different Detroit when Boston plays the team in a rematch of last night this Tuesday, October 30th at 6:30pm EST, as the first test of a clicking Boston offense will show us whether this season's progress will be more linear...or less.