This is merely conjecture, but a new theory has emerged on the alleged spitting by Rajon Rondo on Chris Paul to initiate the melee at the Rockets-Lakers game last night. It is worth considering. 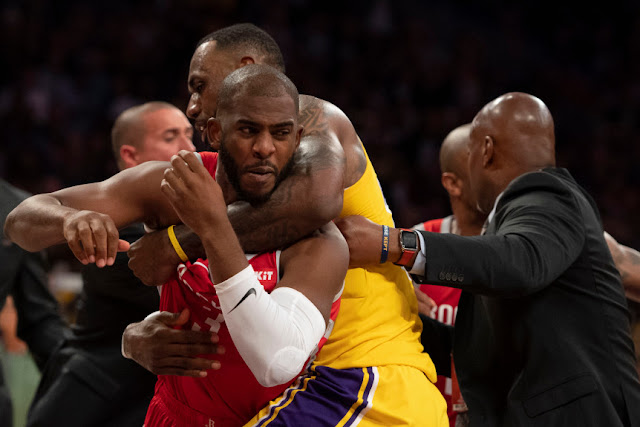 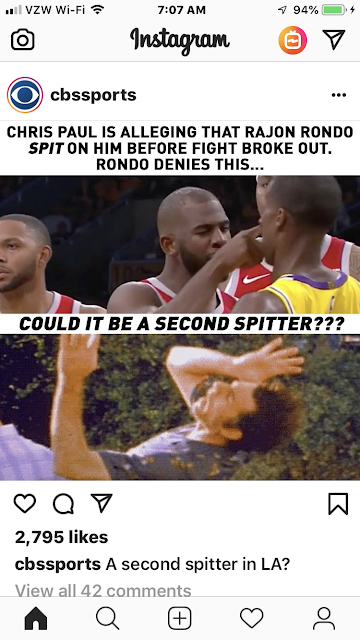 Yes, that's right. Just as in the Seinfeld TV episode, if spitting occurred at all, Rondo may not have been guilty of firing the flying phlegm. It may have come from elsewhere. There may have been a second spitter.

Does former Mets relief pitcher, Roger McDowell, have an alibi? Was he in the stadium? Let's hear what he had to say about the allegations of spitting on Kramer and Newman:

Hey, we know spit happens. It can be accidental. Anyone can spew spit. Charles Barkley was suspended for one game and fined $10,000 for accidentally spitting on a little girl (he missed his intended target). At this point in the phlegm phenom, it appears that the source of spit was not Rondo. So the Second-Spitter Theory needs to be examined. I would recommend DNA samples be taken, although probably too late - showers and all. Was Barkley anywhere near the fracas?

Here is yet another culprit in the #SpitGate controversy, signaled by our reader, forever_green. An accidental oral discharge by CP3's teammate, Carmelo Anthony. The investigation is ongoing.

The question can always be raised, if you can flop-fake like this, maybe you could exaggerate about phantom phlegm.

Sources: NBA's expected to learn two things on case Lakers/Rajon Rondo will make to league: Rondo suffered a cut/scratch under right eye from Chris Paul, which Rondo contends provoked him. Also, Rondo used a mouthguard, which presumably would complicate alleged act of spitting.

Important points here. A scratch and mouth guard would both be pieces of visible evidence. On the other side, no visible spit has been exhibited.

And speaking of scratches, scratch what I just wrote on no visible spit. Info keeps coming in.

Whatever case Rondo's making, NBA is evaluating a video clip captured courtside that shows saliva/spit shooting from Rondo's mouth onto Chris Paul's face. It appears Rondo will have to sell league on fact that it was unintentional -- and that appears to be a tough case to make. https://t.co/ddrhhHuxnN

And here, apparently, is the clip that is being looked at. In the video, it looks like a small bit of spit comes out of Rondo's mouth in the direction of Chris Paul. Intentional or not? No way to tell.

This is one of the pieces of video the Rockets are sending the league office as the NBA investigates last night's fight at Staples Center and determines discipline. pic.twitter.com/YKw7JF13cP

Photo via Kevin Sullivan/Orange County Register
Image via Instagram and CBSSPORTS
Videos via brooklyncyclones and nowthisnews.com