Celtics legend Sam Jones is coming to the Boston area this weekend, and at the present time I attempting to arrange a one-on-one interview with Sam. Jones will be with author, Mark C. Bodanza at Paisano's Restaurant, 450 Lancaster Street, Leominster, Massachusetts at 4:00 PM on Sunday, September 9, 2018. It is a chance for folks to meet Mark and Sam, and it is just a great opportunity for those that wish to attend. 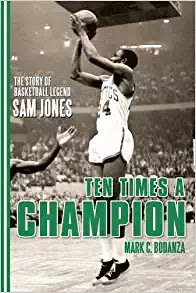 All of the following blockquotes are via Mark's biography of Sam Jones, Ten Times a Champion. In 1957, upon arriving in Boston, Sam's initial impression of the old Boston Garden was not what he expected:

I couldn't believe what I was seeing. There were no lockers, just nails in the wall with wire hangers attached. There was one shower for 10 players.

Nor was his early introduction to the always-direct Red Auerbach. Sam missed an important dinner meeting because he was never told about it. The next day, Red called him out in front of the team and let him have it:

Where the f*** were you last night!

Red never minced words. Celtics rookies got the unenviable task of carrying the ball bag. Sam was able to avoid the demeaning chore, but not Tommy Heisohn - who had to do it two years in a row:

Tommy Heinsohn did it the year before Sam arrived. Heinsohn got the job for the entire season despite the fact that (Bill) Russell was also a rookie the same year. When Heinsohn began his second year, he thought the team's new rookie would inherit the job. Unfortunately for Heinsohn, Sam usually rode with Russell, and Bill wasn't allowing the balls in his car.

Auerbach knew talent - and he realized that Sam Jones was going to be just fine. Sam showed that talent as a rookie in a playoff game against the St. Louis Hawks when Red surprisingly called on him early in the game:

Boy what a surprise it was when coach (Auerbach) pointed at me in the second period and said, "Hey Sam, go in there for (Bill) Sharman." I looked around to see if I heard right - and I did. Guess it must's been 'cause I was closest to him.

Boston won that game, and Jones left the game with 16 points and a loud ovation from the grateful crowd. These have only been a very few of the gems in Bodanza's book. In the event I am able to schedule an interview with Sam, our readers can let me know of any questions they would like asked.

Photo via Amazon
Video via jaranarm