Gordon Hayward is back to 5-on-5, with Aron Baynes and donuts playing a role


Brad Stevens told us two weeks ago that Gordon Hayward would be playing 5-on-5 "very, very, very shortly", and than looked at his watch as though it would begin within hours. Well, apparently, that was the case. 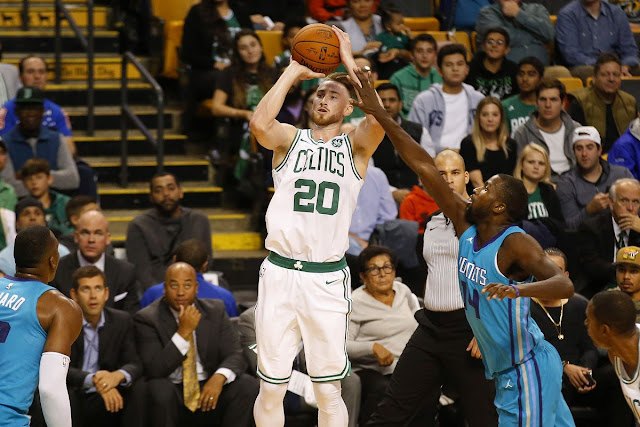 Brad Stevens on Gordon Hayward: "He looks good. ... You can’t tell anything [about the injury] from my untrained eye. He looks good. He’ll be cleared to go, some 5-on-5 here very, very, very shortly -- like," [glances at watch] , "anytime soon." pic.twitter.com/RNabSE2NtD

We now read that Gordon is back and has been playing 5-on-5 for two weeks. So that timeline fits. The important part is that Hayward seems ready to start the season, and we have been waiting for this for almost a year.

He's back! @gordonhayward reveals that he's been playing 5-on-5, and gives a look into the darker moments of his rehab. https://t.co/xDh6Gase1b

Gordon has repeatedly stated that the mental part of his rehab from ankle surgery has been the toughest. He indicated that even small gestures from family and friends has helped him through the dark days. Aron Baynes delivery of donuts was one such gesture (per NBA.com's Marc D'Amico):

“I can remember Aron Baynes – I’m a big donut guy, I like donuts, that’s like my cheat food,” he admitted with a smile, “and I remember he brought Krispy Kremes back from a road trip and drove them over to the house. Just simple things like that mean a lot to me, means a lot to my family too, that people care.”

I am sure that there were many fine acts by others towards Gordon's rehab, but the donut deal stuck in his mind. It wasn't the donuts - it was the nice gesture. How often have all of us really been down, only to have someone say or do something that lifted us back up. You have to love this Celtics group.