Could the Cs retire Kevin Garnett's jersey this season? 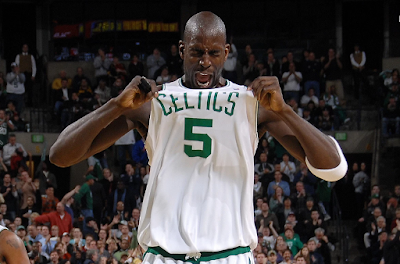 Now that Paul Pierce's jersey is hanging by the banners in TD Garden, don't be too surprised to see Kevin Garnett's jersey join him this season.

Both have left the game behind, at least as players, and it's high time to recognize the man with the kind of send-off he deserves. There's been some question of whether the Boston Celtics should take their time, allowing the Minnesota Timberwolves first crack at honoring the greatest player to ever suit up for that franchise first.

The Wolves seem focused on other things, however, and while I am certain they'll have him honored sooner rather than later, there's no reason to wait on Boston's end as far as I am concerned.

The ten-year anniversary of the 2008 title has come and gone, the fallout that occurred after (mostly) healed, and the roster (save Rajon Rondo) is now coaching, analyzing, or relaxing.


Another sneaky home date possibly to watch is Wed, Jan. 2 8 p.m. vs. Minnesota. #Celtics have strongly indicated they intend to retire Kevin Garnett's No. 5 at some point. Do they wait for Wolves to do it first or do they move on their own now that Paul Pierce's 34 is in rafters? https://t.co/6HLNIfCB6L
— Scott Souza (@Scott_Souza) August 10, 2018

This season, keep an eye on Wednesday, January 2, as it's a home game against Minnesota, and would be a great opportunity for such an event. Whenever it actually happens, let's make sure it's soon.