Celtics vs. Lakers - best all-time starting five for each


This is NOT about the top-5 players from the Celtics and Lakers. It is about the best all-time, 5-man squad in their prime that can be theoretically assembled and play great as a unit. 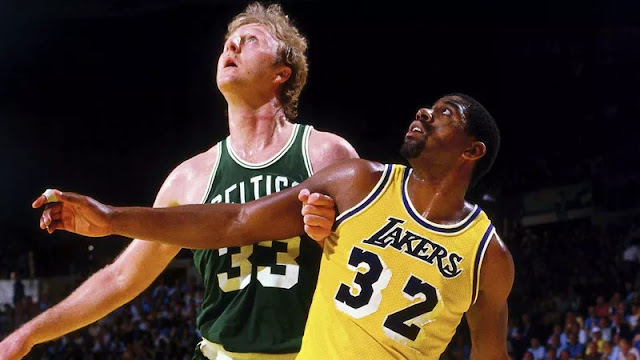 Celtics:
PG: Dennis Johnson - 6'4" two-way player that could score and distribute the ball. Great teammate. Jo Jo White would fit here, also.
SG: John Havlicek - the man's play spoke for itself. I have nothing to add.
SF: Larry Bird - who else?
PF: Kevin Garnett - tough one here. I can not argue with anyone putting either Dave Cowens or Kevin McHale into this slot.
C: Bill Russell - the final touch on an absolutely potent front court

I expect to get some negative feedback on Dennis at point guard, but the guy was just solid, and Larry Bird called him the best player he ever played with. Kevin Garnett at PF may also generate suggestions for other Celts at that position. Havlicek, Bird and Russell may be fairly secure in their spots, but let me know otherwise.

Lakers:
PG: Jerry West - yes, he could play point guard and did it well. Actually, he did everything well - very well.
SG: Kobe Bryant - he would need to play more of a team game than he was used to, but he was so talented, I could not exclude him.
SF: Magic Johnson - yes, Magic at 6'9" in one of the forward spots. Elgin Baylor in this spot would not be an error.
PF: James Worthy - the SF and PF slots are interchangeable here. Both of these guys needed to be in the front-court.
C: Kareem Abdul-Jabbar - there will be arguments for Wilt Chamberlain and Shaquille O'Neal here, or at PF, but this fantasy match-up is not just about talent and size. It is about putting the talent together that provides the mobility and versatility to win.

These are my choices. Give me yours!