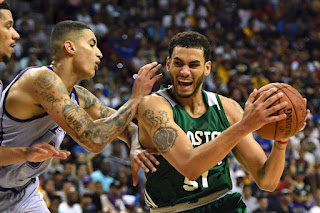 According to Shams Charania, The Boston Celtics have waived swingman Abdel Nader.

This move was not totally unexpected. Nader did well for the Celtics G-League affiliate Maine Red Claws but it never worked out when he played for the parent team at the NBA level. Most of our CelticsLife readers felt there were better options out there for his relief role with the team.

One of those options is Jabari Bird. Bird played on a two-way contract last season and was offered another such deal on a qualifying offer by Danny Ainge. But Bird made it clear that he felt he deserved a standard NBA contract with Boston or another NBA team His performance in the Summer League seemed to substantiate what Jabari said.

Tough hit for Nader, but the Celtics roster is absurdly crowded. https://t.co/vgXCVJOcZ1

There may even be better choices for the newly-created 15th roster spot. Danny Ainge always has surprises. Stay tuned for further moves.