A farewell to Sgt. Mike Chesna from CelticsLife & a plea for his family 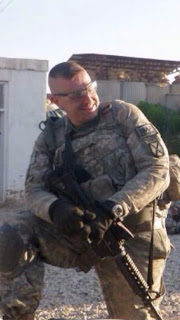 Weymouth Police Sergeant Mike Chesna was laid to rest after services yesterday, the victim of an attack by a madman. A combat Army veteran, he survived tours of duty in Iraq and Afghanistan, but he was taken down by a rock-throwing lowlife who stole the Sergeant's gun - repeatedly shot him in the head and chest - and fired the gun again, this time killing an innocent bystander.

I never met Sgt. Chesna, but there are some personal links here. My daughter, Lisa, knew him well, and they communicated on police work and sports, including Celtics basketball.

Mike and his wife, Cynthia, donated to a fund set up for my grand daughter, Courtney, to prolong her life and make it more pleasant. We found out yesterday that the same fund was critical in Mass General scheduling a double-lung transplant in the future. I will be reciprocating to Mike's family in the name of CelticsLife, a sports link I believe the family will appreciate given his dedication as a fan of Boston Sports.


Here's the maggot who murdered officer Michael Chesna in Weymouth today. Of course he was arrested last year for selling cocaine to children, has a past history of fighting cops, and wasn't in jail. Will judges ever be held accountable?https://t.co/fREzooyP0a
— Turtleboy Sports (@TurtleboyNews) July 15, 2018

Mike loved to play basketball, followed the Celtics diligently, and was devoted to the Patriots Bill Belichick. The following is via Boston.CBSLocal.com:

“He followed all the Boston sports teams with a passion and had a particular devotion to Bill Belichick,” the obituary stated.

The Patriots on Wednesday released a statement from Belichick about Chesna.

“It is heartbreaking for this to be the circumstance to express my gratitude for Sergeant Chesna’s support,” Belichick said. “My thoughts and prayers are with his family and the brave men and women who protect our safety.”

My great grandson, Carson, still has a mother, in part thanks to Mike and Cynthia Chesna and those like them. Olivia and Jack Chesna no longer have a father. Mike's family will need help. Seventeen-hundred readers took in my first article on Mike's death and it occurred to me if each of those 1,700 donated one-dollar to the family, it would help. Information on donations can be found below:

In lieu of flowers, donations in Officer Chesna’s memory may be made to the Officer Michael Chesna Family Fund, and mail or drop off the checks at the Weymouth Police Station, 140 Winter St., Weymouth, MA 02188.

Mike, CelticsLife salutes you for being who you are and for what you have done. You and another died that day, but what people may miss is that your actions, and unfortunately your death, took a homicidal whacko (that's anger coming out) off the streets for good.