Colangelo, caught up in a scandal seeing multiple, likely-connected Twitter burner accounts criticizing the team, its players and its staff in ways only an insider with detailed knowledge of non-public information could have possessed, has reached an agreement with Sixers ownership to part ways with the team. 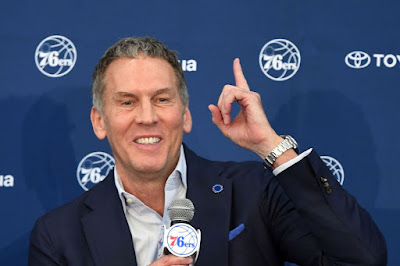 Given the likely impact the cloud of uncertainty over whether the accounts belonged to Bryan Colangelo, his wife, or some guy named Cryan Bolanegelo, Bryan's position with the team was likely seen as untenable given the impact of those burner accounts will almost certainly have on the relationships needed to run a franchise. (Good thing they improved the team's image firing Sam Hinkie!)

The timing almost certainly couldn't be worse, given the momentous draft and free agency concerns the team must now address without a General Manager (at least for the moment). These events could impact the Boston Celtics in several ways, ranging from entirely positive should the newly-renewed rival stumble as a result, to the concerning potentiality of a GM hire increasing the cache of the team to key free agents (coughLeBroncoughGriffincough), or even stealing Boston's Mike Zarren.

Whatever ends up shaking out, it's probably wise to keep a close eye on the, uh, process unfolding in Pennsylvania - it could affect the contours of the Eastern Conference for a long time to come.