To think we were unsure about how Jayson Tatum's game might translate to the NBA not even a year ago. 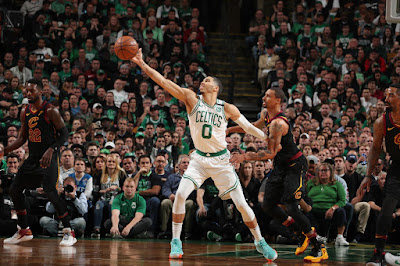 Since then, the young phenomenon has not only managed to translate said game to the Association, but in a big way at that, spending a not- small part of the first half of the 2017-18 NBA season leading the league in three-point percentage, and much of the second half carrying a fair amount of the scoring load for the second-best team in the Eastern Conference standings.

That streak continued and expanded in the postseason, with Tatum coming up a single point shy of the rookie postseason scoring record. But now, with Boston sent packing into the postseason, a single question remains: how much further can this growth go for Jayson?

Watch the videos below for a short dive into Tatum's potential - and a look back at how much the rookie grew into a man in that last series of Boston's postseason.