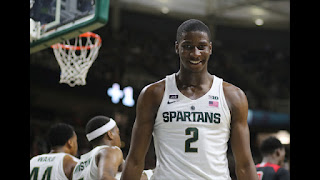 The Memphis Grizzlies are in rebuild mode and possess the 4th pick in the upcoming NBA draft. Their history of drafting the right players and developing them, however, has not worked. Grizzlies' General Manager, Chris Wallace, seems best known during his stint with the Celtics for dealing future star, Joe Johnson, and trading for Vin Baker who was well past his prime and battling alcoholism. Wallace did draft superstar Paul Pierce, but only when Paul fortuitously fell into his lap at pick #10.

Danny Ainge. conversely, has a fine reputation for plucking gems out of the last several drafts and allowing coach Brad Stevens to work them into the Celtics short-term and long-term plans. With the past performances of both GM's in mind, it could be a good move for both teams to look at a deal beneficial to both organizations.

It is no secret that Boston would love to acquire a mobile big man who can rebound, protect the rim, switch defensively and hit outside shots. This year's draft has a number of such players, and both Jaren Jackson, Jr. and Mo Bamba fill the bill. One or both may be available at #4, and either one could be effectively developed into the inside/outside threat the Celtics are seeking. The following comments on the Grizzlies' poor drafts, trades and player development via CommercialAppeals's Peter Edmiston:

...some teams -- the Spurs, Celtics, Jazz, and Warriors come to mind -- seem to be better at maximizing the return on their draft picks than others. But why? Perhaps it's as simple as having a plan, or, too often in the case of the Grizzlies, not having one.

The original sin
"We just are not going to get a chance to get a shot blocker, shot alterer, someone who can have the defensive impact like Hasheem Thabeet in every draft. He's the best shot-blocker in the history of the franchise." - Chris Wallace, after the 2009 NBA Draft

Edmiston pulls no punches on the Memphis struggles. Chris Wallace trading Paul Gasol, the Memphis kingpin, and DeMarre Carroll are two more miscues by the Grizzlies. He may never live down drafting the immortal legend Thabeet. They just can't seem to get it right.

My latest for @memphisnews - no matter who they draft, the Grizzlies need patience -- and a plan -- because those things have been in short supply over the last decade: https://t.co/BoZ4dUNq0m

Danny Ainge may just give Wallace a call to see about a package of Terry Rozier, the Celtics #27 2018 pick - plus giving the Grizzlies back their 2019 first-rounder and maybe the Clippers' 2019 pick. Danny knows who to take at #4 and how to develop him.

6’10 athletic big man with great length (7’4 wingspan and 9’1 standing reach) ... Good athleticism, energy, and activity ... Mobile, well-coordinated, and fluid ... Good hands and touch around the basket ... Can finish with either hand, doesn’t hesitate to shoot with his left hand ... Good rebounder on both ends. Great defensive potential ... Good timing as a shot blocker and gets off the ground quickly ... Rotates and moves his feet well ... Has ability to shoot from outside and has a quick release ... Shows potential as a stretch big man ... Can play the pick and pop ... Good free throw stroke. Solid court vision, passing ability, and understanding of the game ... Spaces the floor well offensively ... Shoots the quick three at times but knows his role as a big man ... Doesn’t try to do too much ... Can put the ball on the floor and get to the basket when given a straight-line attack opportunity from inside the arc. Fits the mold for ideal big man in today’s NBA ... Young for his class, won’t turn 18 until the middle of September of his freshman year ...

"Fits the mold for ideal big man in today's NBA" is what NBADraft.net had to say about Jackson, Jr. Choosing 18-year-olds from the draft is always a crapshoot, but Ainge is always willing to at least try and will take the gamble. This one may be worth looking into.