Watch: Should LeBron be more worried after the Game 1 blowout?

Given how the series between the Indiana Pacers and Cleveland Cavaliers went, it's not on its surface ridiculous to suggest Game One of the Eastern Conference Finals was about feeling out the Boston Celtics. 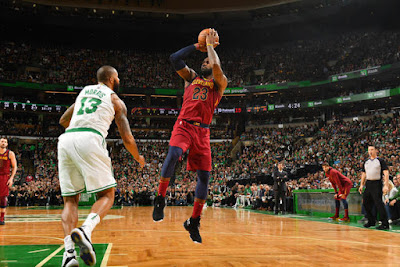 But are the situations truly comparable? The Pacers this season were certainly a big surprise, but they also only really had one trick up their sleeve - Victor Oladipo in the high pick and roll.

Granted, it was super effective on a matchup level, as the Cavs have nobody capable of defending it consistently, but such a strategy, while underused by Boston, is only one of several ways the Celtics can cook opposing teams.

With Cleveland's defense being one of the worst to make the postseason, it might behoove LeBron James to ramp up his level of concern.

He may already have done so - or maybe he has his mind on whatever club he'll be playing for next season - but however he presents his public face, having a higher degree of urgency is likely going to be crucial to the Cavs winning an away game. Watch the videos below to hear some of the opinions flowing from the NBA media after Boston's big win on Sunday afternoon.