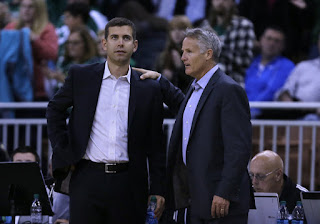 It's probably clear who is who by this point, but how are each preparing for Game Four of the Eastern Conference Semifinals tonight?

Brad Stevens and the Boston Celtics are sitting pretty with a three-to-zero lead over the Philadelphia 76ers, who are facing a home elimination in a whole no modern NBA team has ever dug out of.

The 76ers might just have to bear the Process being over was a premature "confetulation" - while the Celts are going to need to deny the surging Cleveland Cavaliers rest if they want their best shot at dethroning LeBron James in their current state (did I really just type that seriously? Yes, yes I did).

Given the stakes at hand, how are they preparing for tonight?

Watch the videos below for a peek into their mindset and plans, as well as a third-party overview from the guys at NBA on TNT - one way or another, it's going to be a hugely-important game.