Is history poised to repeat itself if the Celts advance to the finals?

History doesn't repeat itself, but it rhymes. 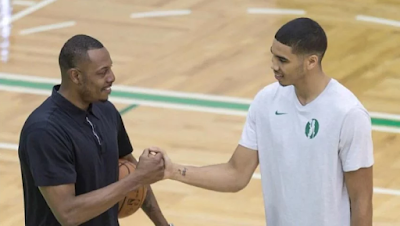 That quote, apocryphal but oft-attributed to Samuel Clemens (better known as Mark Twain), is often an accurate one in many situations, both grand and small. And for the Boston Celtics, it's once again apropos - particularly for Paul Pierce.

We are witnessing the culmination of an entire NBA contention window cycle, the Celtics having been molded by the alchemy of Danny Ainge and the wizardry of Brad Stevens from the iron warriors of Banner 17 into the soft clay of Billy King's (or perhaps Mikhail Prokhorov's) hubris, and from that into a new army of iron - with a green patina, of course.

For Paul Pierce, who died for our basketball sins carrying the team through the wilderness era, something of his resurrection is evident in Jayson Tatum - and the current situation bears a striking resemblance to the 2010 series Pierce, Kevin Garnett, Ray Allen and company sent LeBron James packing - from both the finals and from the Cleveland Cavaliers.

While things are far from settled right now, both of those eventualities might be in the cards this summer.

"We could be seeing history repeat itself ... that’s the funny part about it, because if Boston beats them, we all know he’s gone. He may be gone anyway." said Pierce (per the Boston Herald's Steve Bulpett).  Perhaps it's surprising to hear that Paul doubted Boston had much of a chance in the postseason sans Gordon Hayward, Kyrie Irving and Daniel Theis, but he was among the doubters early on (per Bulpett):

"The thing is, when Irving got hurt, I just thought, like, no chance. They’ll probably lose in the first round ... But the surprising thing is how [Terry] Rozier has stepped up as a starter. You know, nobody knew how good that kid would be. And nobody knew how good [Jayson] Tatum would be ... And then [Jaylen] Brown ... For these guys to be so young and then be in the playoffs and then be in the Eastern Conference finals, that’s just helping them grow. It’s one of those deals where when you give a player confidence - and I give a lot of that credit to Brad Stevens - and that player has potential, that can grow into something special. And I think that’s what I think we’re witnessing right now with these guys. They’re getting tons of confidence, and they’re running with it. Even with the other guys gone, Brad’s putting these guys out there, and he’s expecting the same results. He expects these guys he puts out there to do great."

The Truth can see the Celtics coming away with the win after seeing how they've come together despite the injuries - and he sees a lot of similarities between this team and his 2010 Cs in how they match up with the Cavs (per Bulpett):

"You’ve got LeBron, and he’s capable of carrying his team by himself, but the difficult thing about the Celtics is it’s hard to scout them ... when you’ve got four or five guys who can beat you on any given night, that’s hard to play against. They share the ball and they play tough defense. That’s tough to scout ... In 2010 when we played them down the stretch of the season when we were battling for seeding, we wanted to match up with Cleveland ...we said we wanted to get Cleveland in the second round, because we knew the way our defense was designed, we could beat a one-man team ... and it looks like, right now, this is not a good matchup for Cleveland again. They’re lucky that Kyrie isn’t out there. If the role players don’t play well for Cleveland, they’re in trouble."

Personally, while burned by LeBron-led teams in the past, I tend to agree with Pierce - and even think he may be being generous. I don't think the role players need to play well - I think everyone from top to bottom will have to play their best basketball left in their tank to have a chance in this series. I also think LeBron is already gone whether he wins this series or not, and the Celtics will be back in the NBA Finals for the first time since...2010.

History doesn't repeat itself, but it rhymes - and that's the Truth.