The NBA has determined that J. R. Smith's foul on Al Horford in Game 2 of the Eastern Conference Finals will not be upgraded to a Flagrant 2 and that no suspension for Smith will result. 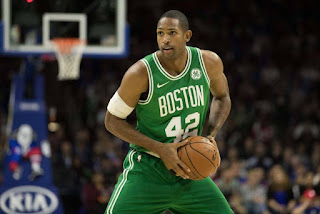 The consensus among NBA broadcasters and analysts, which I totally agree with, is that the Flagrant 1 foul, at the very least, should have been upgraded to a Flagrant 2 with a fine assessed. Television analyst Mark Jackson immediately said, "That's a dirty play!" as the foul occurred, and his partner, Jeff Van Gundy labeled it as a Flagrant 2 foul.

Al was airborne as the shove occurred, and the chance of injury was significant. Horford was definitely shaken up by the contact and the resultant fall.

The NBA uses various criteria to determine whether a flagrant foul is a one or two. Here is a quick look at them and how they relate to the violation against Smith.

1.) Severity of contact: The contact on the surface was not severe. The consequences (injury) could have been.

2.) Was it a legitimate basketball play: Simple answer - No, not at all.

4.) Potential for injury while player is in vulnerable position: Al was airborne at the time of contact - major chance for injury.

6.) Outcome of contact (was there an altercation after the incident): Yes, there was - and it could have escalated.

J.R. Smith on his flagrant: "It was a good call. I blatantly pushed (Horford). It wasn't like I was trying to low bridge him or something. I just wanted to make sure he didn't get it. It was a good, hard foul. I understand why they gave me a flag there." #Cavs #Celtics

Just watching the JR Smith foul again. I'm not saying it will happen, but that could be upgraded to a Flagrant 2 upon review by the league. The entire broadcast crew seemed to think it was a Flagrant 2, and then Smith shoved Smart in the face afterward.

So no Flagrant 2 foul. No suspension. No fine. Could a significant or severe injury to Boston's most important player have changed the course of this series? Quite possibly! The criteria were there for a Flagrant 2. Let's see what out readers think via the Twitter poll below:

Should J. R. Smith's Flagrant 1 foul on Al Horford in Game 2 have been upgraded to Flagrant 2?