Boston Celtics squeak by the 76ers, take a 3-0 series lead

The Boston Celtics came into the home stretch of their first-round matchup with the Philadelphia 76ers expecting their best shot. 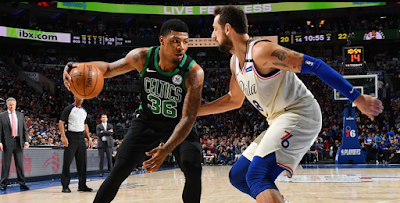 The Sixers indeed came out swinging, with Ben Simmons clearly energized and trying to make up for his lackluster performance in Game Two of the Eastern Conference Semifinals, and Joel Embiid keeping the pressure on as always.

Boston quickly returned the favor, with Marcus Morris, Jaylen Brown, Jayson Tatum and Marcus Smart all scoring early to keep Boston close in the first quarter. A Tatum trey gave Boston its first lead with about eight left in the frame, which the Cs hung onto until Ersan Ilyasova, Marco Belinelli, and JJ Redick started hitting from beyond the arc, the latter taking back the lead in the final seconds of the first.

The second quarter began with a Morris trey that gave the Cs the lead right back at 22-20, and Morris and Baynes would continue to add to Boston's cushion. Terry Rozier got on the board with 6:30 left in the half to extend the lead to ten, but Ilyasova and Dario Saric would chip away at the lead until Embiid snatched it back on a dunk with on Aron Baynes with 2:40 left in the frame.

The Sixers kept the pressure on, with Belinelli and Simmons putting their squad up 50-43, and looked like they would take a multiple-possession lead into halftime before missed free throws and a Brown trey cut Philly's lead to 51-48 to close out the half.

The third quarter started with a Smart floater, but Philly kept ahead until Al Horford tied the game up at 55 with just under 10 left in the frame. Scary Terry began to heat up, hitting a three and a jumper to give the Cs the lead again, but Saric would tie it right back up at 60 at the 7:30 mark.

The game stayed close for some time, but a Rozier bucket and a Shane Larkin layup would give Boston a 69-64 lead at just under the four-minute mark. A TJ McConnell bucket and free throws by Saric got Philly within one to close out the third quarter with Boston on top, 69-68.

The final frame began with a Redick jumper to give the 76ers back the lead, but tatum took it right back with a driving layup that got the friendly bounce. A questionable foul on Baynes looked like he and Embiid might come to blows, but enough folks got in the scrum to defuse it before it became something more.

Quick buckets by Embiid and McConnell gave Philly a cushion, but a Tatum make kept Boston close. Free throws for Morris tied it back up, and Boston took the lead back on a Tatum dunk on the next possession, 77-75 with 8:40 to go. Embiid answered back, but Horford and McConnell did as well.

That didn't stop Al, though, who willed a short hook to the basket to give Boston the lead yet again. Ilyasova got himself to the charity stripe for yet another tie game at 81-up with 6:30 to go. A lot of sloppy play and missed calls later, and Tatum got himself sent to the line on a fouled tomahawk jam, but somehow missed them both.

Rozier and Embiid traded buckets on back-to-back plays, and then Redick and Tatum did the same. Smart fouled Belinelli on a drive in the final minute, fouling out and handing the Sixers a two-point lead, 87-85, and forcing a timeout just seconds before Mook nearly blew what would have likely been Boston's last possession with an ill-advised jumper.

Jaylen hit a quick bucket to tie it up, and then Terry stole the ball on the next play to give Brown a layup and a two-point lead  with under two seconds left, only to see Belinelli tie it back up with a make on the next play, sending the game to overtime amidst confetti for the assumed win.

The extra period started with a Horford rejection of Embiid, but Belinelli hit a jumper soon after, followed by a Redick trey to put the 76ers up 94-89. Horford answered back with a bucket of his own. Tatum got sent by Belinelli to the stripe, where he hit one of two to bring the score to 94-92 Sixers.

Redick and Tatum would trade another pair of baskets, then Simmons and Tatum would do the same, forcing a Sixers timeout with a two point lead and just under a minute of game time. Horford would be fouled by Embiid, where he made one of two, putting Boston behind 98-97. They got the stop on the next possession, and called a timeout with just over eight seconds left in the extra period.

Philadelphia made substitutions, only to see Boston call another timeout after not being able to inbound the ball. Horford made a quick layup to give Boston the lead at 99-98 with five seconds left in the game, then stole the ball and got fouled in the process, this time converting both to give the Celtics a three.point (101-98) win, and a three-game lead in the series.


Sixers: “Nothing matters except for championships.”

COULD WE SAY THIS WAS PREMATURE CONFETULATION?!?
— justin quinn (@justinquinnn) May 5, 2018

It’s crazy because Boston will be doing the sweeping on Monday
— Sham (@shamshammgod) May 5, 2018

The Boston Celtics next face the Philadelphia 76ers at home this Monday, May 7th at 6pm.