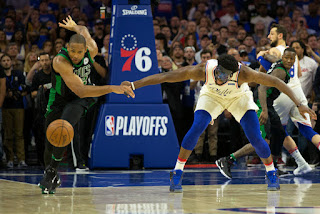 It was an instant classic. The Boston Celtics took down the Philadelphia 76ers 101 to 98 to take a three-zero lead in the Eastern Conference Semifinals.

The game was close from tip to buzzer, with more than ten lead changes in regulation alone. Big games from Jayson Tatum, Terry Rozier and Jaylen Brown carried Boston, and Al Horford's brilliant closing in the overtime period sealed the deal.

Perhaps most interesting was the premature confetti-dropping that evidently thought a late shot by Marco Belinelli was a three and not a two. More than an annoyance slowing down the arrival of the extra period, it was perhaps a most fitting metaphor for the 76ers postseason itself.

I expect to see this team not only Monday, but quite often in the coming decade, playing the Celtics in the postseason. But, until then, we all can watch this game again by playing the video below.