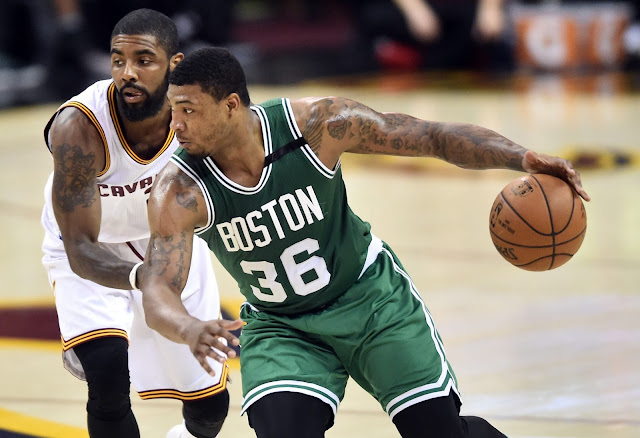 Physical and mental toughness are qualities that each and every NBA player needs. Some purport to have them, but it is obvious when they don't. Marcus Smart is quiet and seemingly, a bit shy. You never hear him speak of his toughness, but it is one of the qualities that truly defines him. Opponents fear him. They hate to have Marcus guard them. I swear some lose sleep over the prospect. His toughness was on display last night big time against James Harden and the Houston Rockets. Boston won the nail-biter 99-98. Marcus had a typical-Smart line of 13 points, six rebounds, five assists, two steals and three blocks. The non-typical, but welcome, stat was the 42.9% field goal shooting.

Looking at the first play in the above video, Smart makes a perfect pass to Jayson Tatum for a score while being guarded by Harden who then almost literally starts wearing Marcus as an outer garment as James waits for the inbounds pass. There is a bit of a push by Harden and the legs get tangled as Smart hits the deck. Offensive foul on Harden. No flop by Marcus.

The next play clearly shows a frustrated James Harden trying to bull his way past Smart and knocking him to the floor. Offensive foul on James. Harden was so hot by this point I thought his beard might ignite.

(includes both Harden turnovers in the final 7 seconds)

Did Marcus Smart get under James Harden's skin? "If that’s what we want to call it, I probably did." Is he good at that role? "I guess you could say that. My mom might say that." pic.twitter.com/3eXQ42ZakW

Quiet ferocity really defines Marcus Smart. He speaks softly and quickly turns into a fearsome and relentless dynamo on the court. He wins games with his willingness to do anything required for victory. Every NBA team needs a guy like him, and that worries me with his next contract looming this summer. I don't want to see him on another team next season guarding Kyrie Irving. It wouldn't seem right!