Should Tony Allen's number be retired in Memphis? 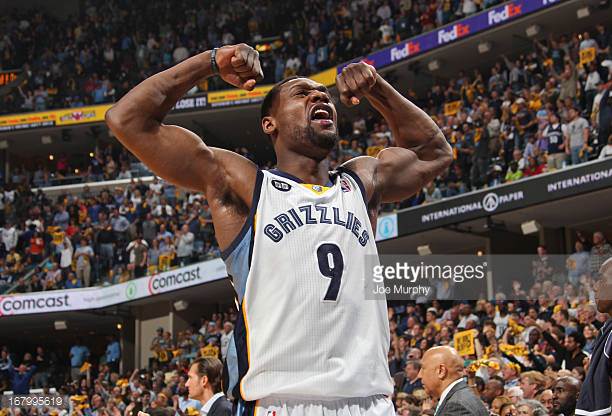 We all know that Tony Allen is as reputable of an NBA player as they come. He's been making an impact in this league since the year that he entered it by playing tight, all-purpose defense against some of the best players that have ever stepped onto a basketball court. But is being only an elite defender convincing enough to get your number raised to the rafters?

Here in Boston, you need to be a true NBA legend to get your number put on the ceiling. Out of the twenty-three players that have had their numbers retired in the Garden, only four of them aren't Hall of Famers, and those guys have other impressive accolades that prove them to be worthy of remembrance.

Jim "Loscy" Loscutoff isn't in the Hall, but he won seven championships with the Boston Celtics and was a crucial part of the Cs' first ever championship victory in 1957, when he sank two, clutch free throws at the end of the game to give the Cs a 125-123 win in double overtime against the St. Louis Hawks. Cedric Maxwell has two rings, and was named the Finals MVP in 1981. And the final two retirees who aren't in the Hall of Fame are Reggie Lewis and Johnny Most. Reggie Lewis' number was retired posthumously after he died of cardiac arrest at an off-season practice, and Johnny Most had his microphone raised for being the voice of the Celtics for almost 40 years. It's no easy task to have your number raised to the rafters of the Boston Garden.

Other NBA dynasties are the same, only having Hall of Famers or Champions hanging from the roof. If you look up at a Los Angeles Lakers game, you'll see ten numbers swinging, and you'll be able to find all of those guys somewhere or other in Springfield. 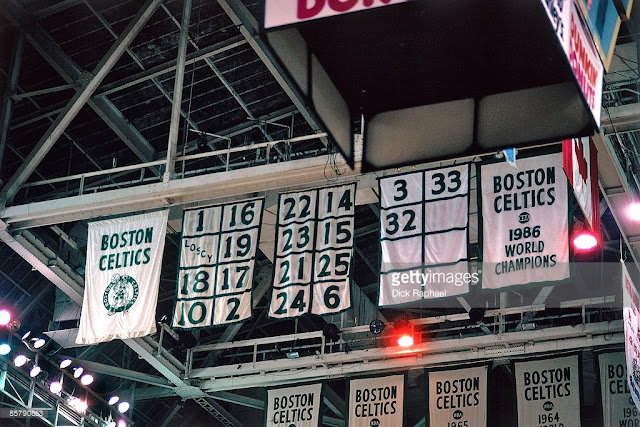 So what qualifies a player to have their number lifted? Well, we've already mentioned a Hall of Fame induction or a hoisting of the Larry O'Brien Trophy, one of which Tony Allen has experienced, but not in Memphis. What other merits should players have that would help them to be immortalized in their city's arena?

I would consider playoff appearances as a factor in becoming honored by your team. In seven seasons with the Memphis Grizzlies, Tony Allen has been to the playoffs seven times, and they even made it to the Conference Finals in 2013. Batting 1.000 in 'making the playoffs' is pretty damn impressive, especially in the NBA's top-heavy Western Conference. During those playoff runs, the Grizzlies beat great teams, such as the 2011 San Antonio Spurs and their classic big three of Tim Duncan, Tony Parker, and Manu Ginobili, and in 2013 they beat Kevin Durant and Russell Westbrook's Oklahoma City Thunder to advance to the WCF.

The asterisk that accompanies this category of potential number raising is that Tony Allen didn't necessarily lead these teams to the playoffs. There are three other players that had more of an impact in those post-season runs, and they were on the team for just as long as Allen was. Michael Conley Jr. was drafted to the Grizzlies, and has improved to become one of the premier point guards in the NBA today. In 2013 when the Grizzlies made their lengthy playoff run, he averaged 17 points, 7 assists, 4.7 rebounds per game. Marc Gasol has also been a Grizzly for his entire career, and during the same playoff year, he averaged 17.2 points, 8.5 rebounds, and 3.2 assists per contest. And finally, one of the baddest dudes to ever play in the league, Zach Randolph, was on those teams. In the 2013 playoffs, he lead the team in points and rebounds, putting up 17.4 points a night and grabbing 10 rebounds. Tony Allen's numbers aren't as impressive, as he averaged 10.3 points, 6 rebounds, and 1.8 assists per game during that stint.

To be fair, Tony Allen isn't known for his offensive stat line, but it just seems weird that the Grizzlies would raise his number when they have other current players that could eventually be memorialized. It's not like the Grizzlies are lacking numbers to retire, and at this rate, they'll be raising four numbers from these Memphis teams that never even made it to the Finals. I understand that each of these guys are passionate and feisty and fun to root for, but does that make them worthy of number retirement? Out of the four players mentioned: Conley, Gasol, Randolph, and Allen, I think that Tony Allen is at the bottom of the pecking order.

His defensive accomplishments must be special enough in the eyes of the Grizzly's front office. Tony Allen made it to six All-Defensive Teams in his seven years in Memphis, and three on those nominations were for the NBA's First All-Defense Team. That's a rare string of superlatives to achieve in the NBA, and to excel at such a crucial element of the game is most definitely something to cherish. While his offensive numbers may not have been top-notch during those playoff stints, his defense certainly was. I mean, check out this video of him guarding Kevin Durant. Absolute suffocation. Kobe Bryant even referred to Allen as the best defender he's ever faced. Not too shabby of a compliment from one of the GOATs.

Something else that should be considered when choosing whose number to retire is attitude, particularly in the departments of hustle and leadership, two categories that Tony Allen has commanded for years now. In Memphis, his teammates referred to him as the 'Grindfather,' because of the hard-work that he constantly put in. He wants the ball, and he'll get it from you in any way that he can.

I'm glad that Tony Allen is being honored for his ability, and wish that more players would be honored for their defensive excellence. An entire half of playing the game in on the defensive end, and it arguably takes more heart and effort to play on that end of the floor. And plenty of players who barely ever D'd up have had their numbers retired, even though they only excelled at one half of the game. Maybe if great defense was recognized more often, little kids would stop focusing on hitting half court shots, and instead would try grinding, and working on the fundamentals of the game. Wouldn't that be nice?

This conversation makes me respect the great two-way players more. Guys like Tim Duncan, Kevin Garnett, and Kobe Bryant were not only great at scoring, but were each nominated to more than ten First All-Defensive Teams. These guys deserve the Hall, they deserve the world-wide, everlasting fame and honor. Let the one-way guys, like Tony Allen, have their local royalty and their numbers retired.

So what do you all think? Does Tony Allen deserve to have his number retired? In Boston, that'd be a long shot, but what about for the years that he put-in in Memphis? My biggest concern is with whether or not NBA teams should even have different standards when retiring numbers. It's a bit unfair to say, "Tony shouldn't be retired in Boston, but should be in Memphis." Should there be a universal standard of what a player must have done to earn such a high honor? Let me know what you all think. I think this is a debate worth discussing.