Will Jayson Tatum's most lethal weapon be utilized? 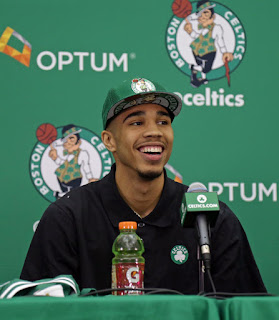 Danny Ainge and the Boston Celtics have a lot of confidence in the 2017 third overall pick, Jayson Tatum. So confident, in fact, that they traded the 2017 number one overall pick to the Philadelphia 76ers in order to move down in the draft and snag him. This was a pretty ballsy move considering number one overall pick of the 2017 draft, Markelle Fultz, looked like such a stud in college. This move shows that Danny Ainge sees a remarkable amount of talent and potential in Tatum.

Tatum played at Duke University for just one season. In that season, he averaged 16.8 points per game, 2.1 assists per game, and 7.3 rebounds per game. He also shot 45% from the field, and 34% from beyond the arc. The main reason that Jayson was brought into Boston is for his scoring ability.

Last season, the Celtics had trouble scoring when Isaiah Thomas was not on the floor. When he was out of the ball game, Boston didn't really have anyone they could rely on to score the basketball. This may sound redundant, but scoring is such an important part of basketball. Without players that can score in a variety of ways, the offense can become stagnant depending on the defensive strategies and rotations.

Tatum is frequently compared to players such as Carmelo Anthony. While Anthony's name doesn't quite have the star power and impact associated with it that it used to, Carmelo is one of the best pure scorers the league has ever seen. When someone says the word, "scorer," my mind immediately goes to Carmelo Anthony in today's NBA. The main reason why the two are compared, is a turn-around jumper that both players have mastered. This is one of the harder shots in basketball, considering the defender is almost always there to contest it.

Because it is such a difficult shot, NBA coaches tend to shy away from it because of its lack of efficiency. This hesitation from coaches to allow their players to let it fly in this situation has brought up questions about whether Jayson will have the green light or not. In Summer League, Tatum showcased his ability to knock down the turn around jumper. That being said, it's the Summer League. Players are less experienced, especially on the defensive end of the ball. He didn't even knock those shots down with a great amount of accuracy. This is why people are questioning whether Coach Brad Stevens will encourage taking those shots, or condemn them.

It is somewhat of a catch-22. This is a shot that instantly generates offense, and can be a go-to weapon if the Celtics are ever in need. However, it's not the most efficient shot in the world. Probably one of the least efficient, in fact. So what is Brad Stevens going to do?

Exactly what Boston drafted Jayson Tatum for. Let that dude score some buckets. Whether he starts or not, Tatum can be a great engine and offensive powerhouse for the Celtics if they need scoring. The addition of Gordon Hayward also helps the C's offense, but I think Jayson will still get plenty of touches and plenty of shot attempts will fall for the rookie.

This may mean that he doesn't shoot all that well next season. That is something that the Celtics are going to need to live with. Giving him the green light to score in certain situations will develop Tatum quicker than anything else. The more times he fails, the more he learns and the more he progresses.

Not only can Tatum help the Celtics when the offense becomes stagnant, he will also learn so much while doing so. No one looked at him in college and said "wow, what a good passer," or "wow, what a rebounding machine." Tatum was known in college for his scoring, taken third overall for his scoring, so you best believe he's going to score in the NBA.