What the Hell Happened to...Willie Williams? 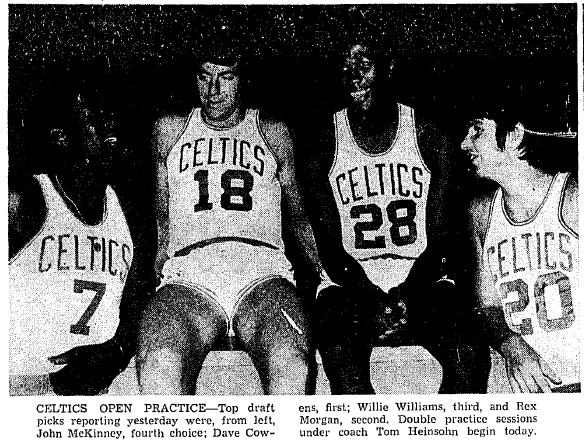 All my mistakes have been on defense. What's holding me back is that I turn my head and watch the ball too much.  In college, I used to average seven blocked shots per game. Up here I can't do that because I wind up losing the man I'm supposed to be covering-  Willie Williams on transitioning to the NBA and playing for the Celtics


He only scored 23 points in his NBA career: 15 with the Celtics and 8 with the Royals.  When the Celtics selected Dave Cowens in the first round of the 1970 draft, this college teammate of Big Red's was Boston's 3rd round selection.  For more than 6 years, CelticsLife has been trying to locate this player's whereabouts and we're still not done in our search.  Hopefully posting this article will help close the circle.  Surely you remember Willie Williams, right?

Oh I'd played around a bit as a junior to strengthen my leg. I'd hurt it and had to have an operation to drain out the poison. So I began playing basketball to strengthen the leg.  I was small.  The Summer before my senior year, I grew 3 to 4 inches and that next season I was on the basketball team.


After graduating high school he started at Miami Dade Community College, before joining forces
with Cowens, Skip Young and the rising Florida State squad under coach Hugh Durham.  Williams had caught the eye of Red Auerbach on his trip to scout Cowens and the Celtics happily drafted Willie with their 3rd round pick (38th overall, making him a high second round pick today).

Willie had watched the Celtics growing up as often as he could, actually hoping one day he could play for them.  He quickly signed his contract with lawyer Tony Avitable after arriving in Boston.

At FSU, Williams was fine playing inside if Cowens stepped outside, the same way Dave did when he played with Paul Silas in Boston.

He was known as "The Leaper" for his ability to jump; he was 6'7 but played bigger and Williams chose the Celtics' contract over one that the Miami Floridians of the ABA had offered.

However the transition to the pro game was hardly easy for Willie.  While the athleticism appeared to be there, defense was a whole different thing. Head coach Tom Heinsohn was a big believer in Williams:

He has a lot of raw talent and great speed. He's got to learn the pro tempo. If he gets to play 5 minutes he's got to bust himself while he's in there.  In college he was used to pacing himself. Willie can jump and shoot; he's so damn fast, he can help us on the fast break and off the backboards. 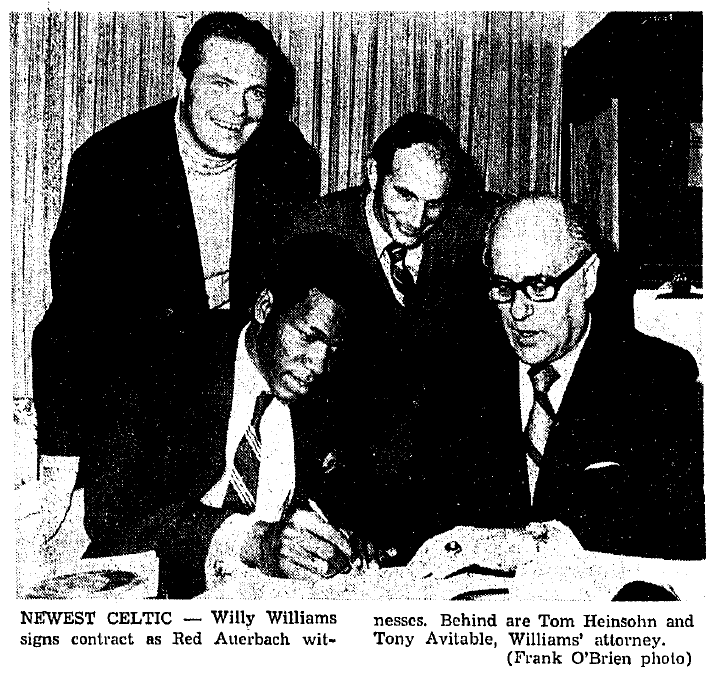 Willie however seemed flummoxed and was unaccustomed to the inconsistent minutes he got.  He feared he was getting out of shape and out of rhythm.  As a result, Willie admitted to "fumbling the ball or missing easy layups."  His defense never improved.

He was the only Celtic at the time to be getting less playing time than Garfield Smith.  The "corner man" [TB Tangent II: I love how forwards used to be called corner-men.  That needs to be brought back] had failures defensively, laying off his man and inexplicably forgetting to annoy the opponent with upraised hands.  And continuing to take his eye off the ball.

I sit beside John when he is on the bench and he points out all the mistakes that happen in a game.


But it was all for naught.  When Satch Sanders returned from an injury in January of 1971, it was Williams who became the odd-man out.  Sanders himself had described Willie as "another Bob Dandridge" but agreed the rookie needed playing time.  It wouldn't come in Boston. 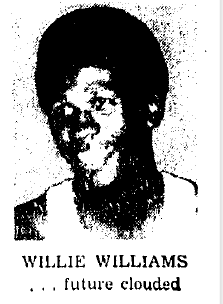 Williams was claimed off the waiver wire by Bob Cousy and the Cincinnati Royals in late January of 71.  He'd play 9 games for the Royals.  The Royals waived him in July of 1971.  And that's where it ends.

I admittedly never got to see Williams play but it seems he may have been a precursor to Steve Downing, who came along a few years later.  And just as Bob Ryan had written quite the description of Downing he had his own thoughts on Williams:

"Willie Williams can run, jump and shoot but is hardly aware of many basketball nuances."- Bob Ryan


Clearly more concise than Ryan's emasculation of Downing.  In addition to their proclivity to "mess up" out there, both Williams and Downing have photos with Red Auerbach that we've published during their signing with the team.

We're struggling here.  Maybe because "Willie Williams" is such a common name.  We tried Booker T Washington HS, Miami Dade Community College, and Florida State for some direction, but got nowhere.  Former Celtic Skip Young, a teammate of Willie's at FSU said "you're gonna have a hard time tracking down Willie."

So we're turning to you, CelticsLife, specifically fans in the Miami Beach area, if they know where Willie lives or what he's been up to.  This is only the 4th time we've produced a WTHHT without knowing what the player was actually up to today when published.  For Garfield Smith, you helped us solve that.  For Brett Szabo and David Thirdkill, it remains a mystery.  We even knew Thomas Hamilton is a bouncer in Chicago (although no one ever took us up on telling us what club and winning the free t-shirt!)

So who can fill us in on Willie Earl Williams' post-playing career today?