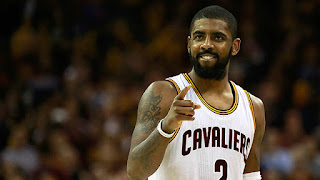 The Boston Celtics have acquired All-Star point guard Kyrie Irving in a blockbuster deal with the Cleveland Cavaliers.

Irving first requested a trade last month. The 25-year-old point guard was unhappy with Cavaliers management while playing second fiddle to LeBron James. Irving initially signed his four-year extension in 2014 before James had agreed to rejoin the Cavaliers.

Irving has now spoken with Celtics officials, who made the deal with the belief that Irving will re-sign in Boston when his contract runs out, according to ESPN's Adrian Wojnarowski. Wojnarowski added that Irving is "thrilled" to join the Celtics.

The Celtics and Cavaliers will meet on opening night in Cleveland on Oct. 17. The Celtics have traded or let go four of five starters from the 2016-17 team that reached the Eastern Conference Finals while adding Irving, Gordon Hayward, Jayson Tatum and Marcus Morris.

Boston now has a new Big 3 under contract for the next couple seasons with Irving, Hayward and Al Horford. Thomas, now with the rival Cavs, helped recruit both Hayward and Horford the last two off-seasons. By trading Thomas, Crowder, Avery Bradley and the first overall pick in the 2017 draft in one off-season while acquiring Irving, Hayward and Tatum, among others, Danny Ainge has had perhaps his most important -- and risky -- off-season since trading for Kevin Garnett a decade ago. 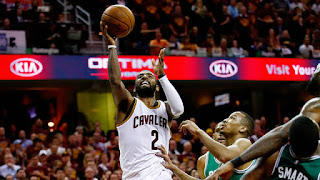 Irving was struggled to optimize his game next to James and has long been an admirer of Lakers star Kobe Bryant, who helped forced Los Angeles's front office to trade Shaquille O'Neal in 2004 so Bryant could have his own team.

Despite the tension between Irving and James, both of whom can function as primary ball handlers, they combined on one of the greatest comebacks in NBA Finals history, coming back from 3-1 down against the 73-win Warriors in 2016 to win in a shocking Game 7, in which Irving hit the game-winning three-pointer.

And it was Irving, perhaps more so than James, who put away the Celtics in the 2017 Eastern Conference finals. His 42-point explosion in Game 4 brought the Cavs back from down double-digits with James on the bench and helped Cleveland establish a 3-1 lead in the series.

In his short career, Irving has already made four All-Star teams and proven to be one of the best scorers in the game. His defense has been called into question at times, but he's often been able to make up for it on the offensive end. His career-high 57-point game in 2015 broke James' Cavaliers franchise record. 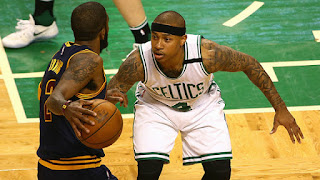 Thomas, meanwhile, became a fan favorite and reached new heights in Boston. He led the team with a career-best 28.9 points per game last season and was the catalyst for the Celtics' run to the Eastern Conference Finals. His 5-foot-9 frame limited him defensively but also helped him earn the Boston faithful's devotion with his crafty style on the court.

His perseverance after his younger sister's death before the 2017 postseason further endeared him to Boston fans as Thomas wore his emotions on his sleeve throughout the Celtics' run.

The 28-year-old point guard has spoken about his desire for a max contract after the season, often mentioning that the Celtics would have to back up a Brink's Truck to pay him next offseason. Now, the Cavaliers will have two high-profile expiring contracts with James and Thomas set to be unrestricted free agents.

Crowder is on one of the more team-friendly contracts in basketball. Signed before the most recent Collective Bargaining Agreement (CBA), the 27-year-old wing will make just over $7 million per season through 2019-20. Crowder was initially acquired in the Rajon Rondo trade in 2014 and averaged nearly 13 points per contest for 202 games in Boston.

He had harsh words for fans last season after the TD Garden crowd cheered for Hayward, who Crowder rightfully saw as his potential replacement. Now he's less than two months from his first matchup against his former team.

Zizic was the No. 23 pick in the 2016 draft. After playing overseas last season, he signed with the C's on July 1 and played for their Summer League team.

The Nets pick is the last piece of the 2013 trade that sent Paul Pierce and Garnett to Brooklyn in a blockbuster that closed out the previous Big 3 era in Boston. The deal allowed the Celtics to draft both Tatum and Jaylen Brown among others and now helps them acquire Irving.

Pierce will have his uniform retired on Feb. 11, when Irving and the Celtics host Thomas and the Cavaliers.