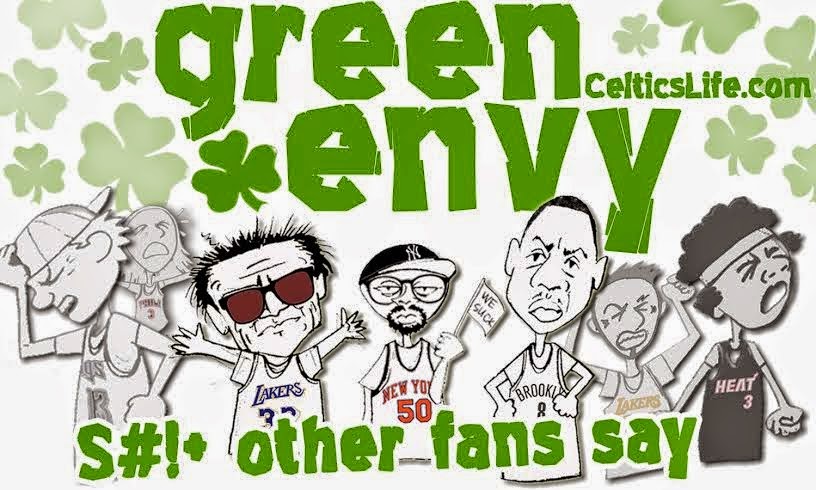 Enjoy this one, folks - it's special.

Special not just because it's almost certainly the last of the season (unless we shock the world and steal a second game), but also special because of how hard-fought, unexpected, and well-deserved this win was for the Boston Celtics and those of us who still tuned in to watch after the last pair of debacles. So get your schadenfreude while it's hot - it could be a while before we've got another batch waiting for you.

This is just a warmup for the Cavaliers right now. With Kwahi Leonard out the Warriors are also just warming up with the Spurs. Lest people forget game 1 the Spurs were winning by 20+ points till Kwahi went down to an intentional dirty play. The main event will be in a week or so. My money is on the Cavaliers defending the title.

ferreal tho what reason is there to watch the regular season anymore unless you’re a diehard NBA fan. especially as a Cavs fan…

LOV3 IS IN THE AIR

Wouldn’t be surprised if we take our foot off the gas tonight similar to the way we did vs Toronto in G3 but it probably still shouldn’t matter. The offense will still be too good

First blood shockingly drawn by the Celtics of Boston.

Love shows his Hate for the Celtics.
Olynyk, you created a monster!

Zeller got the big rebound and promptly fell out of bounds.

Good first quarter. Somehow not a blowout yet.

First lead for Boston in over 48 minutes.
And it’s already gone.

I don’t know about those last two fouls.

Kevin why’d you throw that away with a wide open Kyle Korner?

So far, LeBron seems content to get the ball to Love since he’s on fire. Showing absolutely no concern right now for continuing his 30+ point streak.

Refs tryna keep Boston in it, per usual

Take care of the ball better on offense and this isn’t even this close.

Shump midranging? He’s gonna get cocky and play out of his lane soon

Shump playing out of his lane = dribbling more than twice

He lives in Ohio, if you didn’t know.

Is that Amy Schumer next to him? Sure looks like it.

Yep. I imagine she’s friends with LeBron since he was in her movie.

LeBron is playing around out here.

Crowder is already at 3 fouls.

Sure would be nice to stop turning the ball over.

At least Boston is showing fight tonight (much like the Spurs for much of last nights game). Unfortunately for them, it will still be a double digit loss (like last night).

Marcus Smart is the NBA equivalent of a pile-jumper

Stop letting Marcus Smart look like anything more than a flaming bag of feces (which is what he is).

Jesus, what morons some fans are. One guy is STILL actually trying to say Kobe is still better than LeBron and Bron not on his level. I strongly dislike Tom Brady, but I’ve been able to admit he’s one of the two best or THE best qb for a LONG time……..the competition LeBron has faced in the finals is second to none in NBA history……lol, I love how that one guy also said "let’s see what happens when he plays KD for a whole series instead of Harden…" and you were like "ummm, 4-1 2012 finals. Hell, harden, Westbrook, AND KD were on that team. And you can see where LeBron haters are going this year. They’re pretending KD didn’t go and join a 73 win team with 3 other ALL-NBA players and a two time MVP and the only unanimous MVP ever……..if there is really a basketball GOD, I promise the Cavs will smoke the Warriors.

Sometimes you find crazy users there.
"lebron maybe will enter in the top 10 ever if he wins this year" kind of stuff.

LeBron needs 22 more if he wants the record for most consecutive 30+ games in the playoffs.

This appears to be one of those rare games where LeBron is a bit out of sorts. Just not smooth, a bit out of balance and the explosion is missing. Happens to the best of ’em.

Need to extend the lead, they’ll back off when the outcome is determined.

Bradley pushed Kyrie. Would rather Boston just laid down.

You have to force them to. Push the lead to 20+ and they’ll go away.

Any time you want to take over this game LeBron, that would be great.

Number 8 looking for a kick in the face.

Man korver stay on the ground…

Get korver off the floor. Lord.

Korver has been GOD AWFUL this series

don’t worry. If he struggles like this against warriors, he will be yanked immediately.

One quarter of chaos to go. For the first time this series.

Cavs need to stop screwing around.

Cavs are no-hearting this one.

gettin’ a little close for comfort

I do not have the fortitude to make it through this game. See you all tomorrow

The Cavs are taking their feet off the pedals and giving the Celtics momentum. Come one Cavs! FINISH THEM!

They haven’t mailed it in yet. I’m impressed.

This is one of those games where Cavs get to practice overcoming some struggles. Slow it down, execute, make off-the-ball cuts, find the open man and then clamp down on defense.

First 2 games vs Boston this year were home games where the Cavs built a 20 pt lead and Boston try harded their way back into it. Same story here.

what happened to playoffs lebron?

Got too passive once he saw his teammates doing the work for him.

LeBron is having his worst playoff game since his return in 2014. Unless I’m forgetting another even worse playoff game of his since 2014.

LeBron wasn’t sure what the hell Shump was doing there.

Shumpert is one of the dumbest players in the NBA

wtf is this Mahcus

Endless fucking rebounding for the Celtics.

Can we stop fouling people behind the 3 point line too, please?

TIED RIGHT BACK UP

This game is crazy right now

Welp. Good on the Celtics. On to the next.

Strap up and get the next one . well played Boston.

This should be a tough lesson for the Cavs. Don’t be complacent. Otherwise you’ll get burned. Adversity is necessary. What doesn’t kill you makes you stronger

Jerebko thinks he should be the star.

Marcus Smart is so good. He’s a total flopper, but he’s good

Not going away easy tonight.

I haven’t been able to see every minute of the game, but I saw most of the first half, and the beginning of the second, and I thought Stevens did a good job making defensive adjustments. Maybe he really is a good coach.

When you play poorly you make yourself a hostage to fortune, alas.

The Celtics are a 1 seed for a reason.