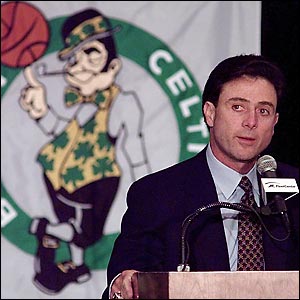 If you don't know the rant of which I speak, you are probably a younger fan. Pitino, a Massachusetts sports icon from his playing days at UMass-Amherst and early coaching days at Boston University, seemed a natural signing for the Boston Celtics once Pitino rose to prominence at the University of Kentucky.

It went very, very poorly - save for drafting Paul Pierce. Almost nothing else went right, and the Pitino era is widely regarded as one of the primary reasons the club languished in the proverbial "treadmill of mediocrity" as long as they did. Initially ebullient, Pitino's enthusiasm soon soured after his heavy-handed moves failed to recreate the success both he and the organization had become accustomed to. This frustration boiled over in a now-infamous presser where Pitino would let all his disaffection with the situation out in the open, saying:


The writing on the wall was, in this case, a rant. Not even a year later, the Pitino era came to an end with his mid-season resignation.