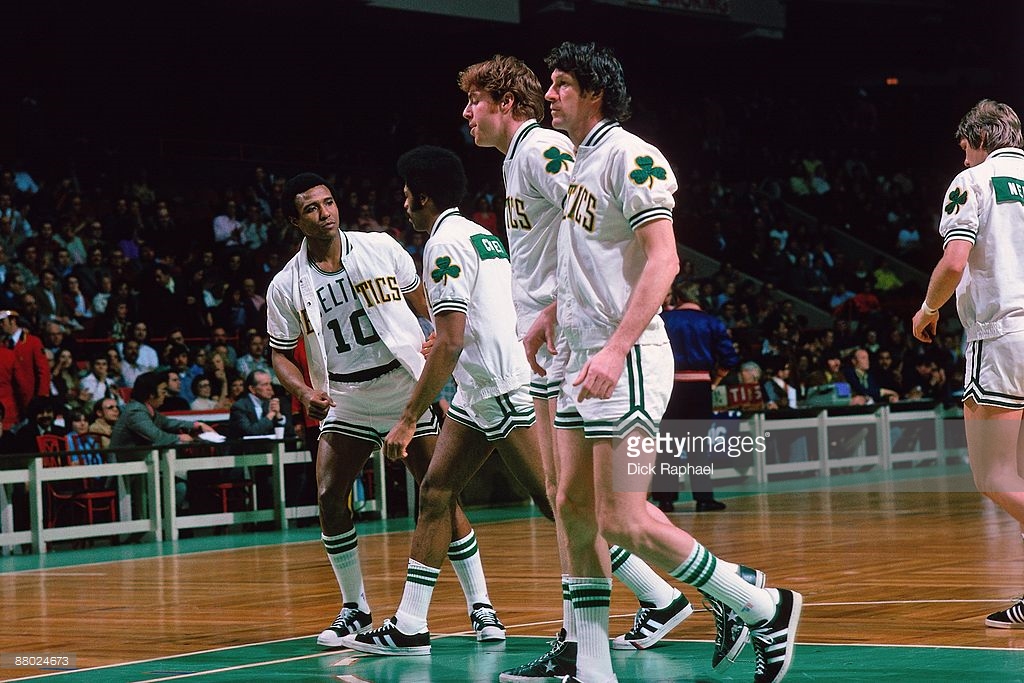 
With their first selection in the legendary 1984 NBA Draft, the Houston Rockets snatched up the Guy V. Lewis-trained Akeem Olajuwon from right around the corner at the University of Houston. With his final selection in the first round of that same draft, Red Auerbach went around that same corner to choose the not-so-legendary Michael Young.

Sixteen years earlier, the Celtic GM had utilized the very same tactic – but much more effectively. The Rockets, in their second year of existence and still based in Southern California, had selected another Lewis product, Elvin Hayes, at the top of the 1968 draft. Holding choice 12 in a 14-team league, Auerbach scooped up a lanky, long-armed pest by the name of Don Chaney. Like the Phi Slamma Jamma’s from the Jordan era, the Big E Bunch won their way to back-to-back Final Four appearances for their Hall of Fame-bound mentor before encountering a foe that “Wooden” budge. 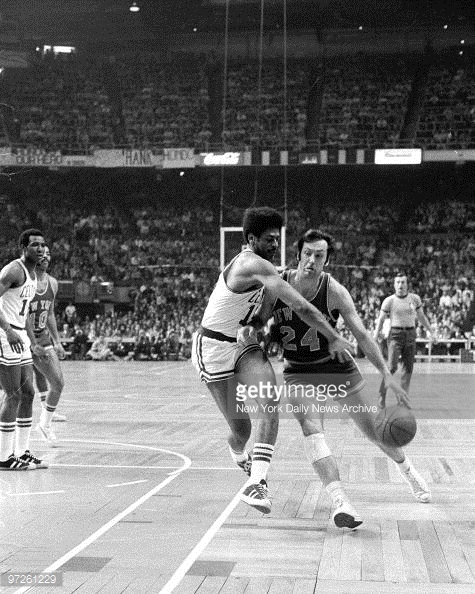 While the cart and horse had shifted position by the mid-80’s, an Athletic Department was still just some under-fitting in a university’s hierarchical structure back in the late ‘60’s. Nike dollars and the Big East had yet to arrive – and the NCAA offered a geographically-logical, if proportionally-clumsy 23-team Division I Basketball Tournament, fitting five rounds with plentiful consolation play into just over two weeks.

Only two of the nation’s 15 DI conferences (the ACC and Middle Atlantic) awarded their automatic tournament bid by means of a post-season intramural skirmish – the others used regular-season play as the proving ground. Until 1975, only one school per league was admitted to the NCAA’s. The at-large teams, two from each region, represented truly independent schools with no conference affiliation.

The NCAA simply added a couple of vertical lines to the Mighty Mississippi to create its four geographical regions. The lines of battle seemed to allow for a little “play,” as Lewis’s at-large Cougars seemed to flip-flop between Mid-West and Far West classification.

On St. Patrick’s Day of 1967, the seventh-ranked Chaney Gang was facing the nation’s No. 3-ranked squad on its home court, 17,000-seat Allen Fieldhouse in Lawrence, KS. The partisan Jayhawk crowd was already in good spirits, having just witnessed the upset of second-ranked Louisville by Southwest Conference king Southern Methodist.

Pretty stacked bracket, huh? (This is only the Sweet Sixteen!) 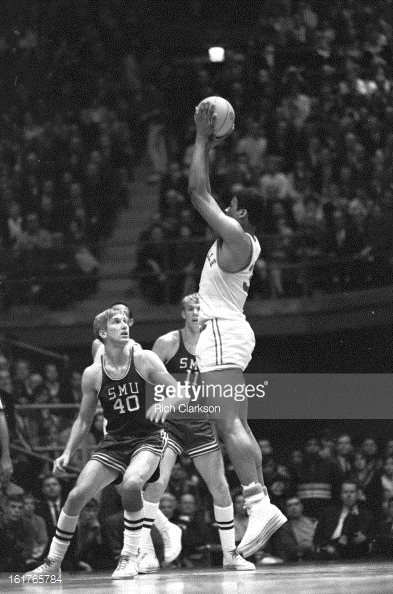 Pretty talented, too – those ousted ‘Ville-agers included under-class versions of Wes Unseld (who in a couple of seasons would out-perform Hayes while winning the NBA’s ROY and MVP awards simultaneously)and Butch Beard.
The host team featured yet another non-senior star, a smooth backcourt man from St. Louis and bound (via the North End of Boston) for Springfield. Auerbach would nab this player with the 9th pick in the 1969 draft.

New England fans of college ball were that night more likely attuned to Bob Cousy’s best-ever Boston College Eagle squad, who’d topped out at No. 9 in the polls that season and would advance past St. John’s before dropping the East Regional Final the following evening to Dean Smith and North Carolina.

The national spotlight was focused on Corvallis, OR and the NCAA Tournament debut of a certain UCLA sophomore.

But the near-future of the Boston Celtics was on display in Mid-America – the kid from KU was named Jo Jo White. 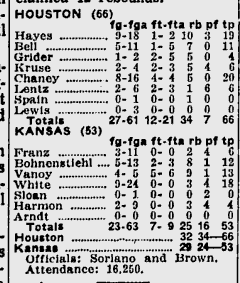 Post-game, the victorious coach opined, “I never want to play a better guard than Jo Jo White. When [KU coach] Ted Owens says that kid is a competitor, you better believe it!”

The ‘Hawks and Coogs parried through the first half, neither team forging more than a five-point lead as Houston took a 32-29 advantage into the intermission. Lewis took that opportunity to refine his zone defense, and the Cougars extended their lead to 40-31 in four minutes.

White sparked Kansas’s last hope with back-to-back steals and conversions to pull within 55-51 with about five minutes to go. But the Jayhawks could add but two points from there and fell 66-53.

The pesky Houston defense, sparked by the “length” and instinct of Chaney, harassed KU into 33% shooting for the second half, 37% for the game. 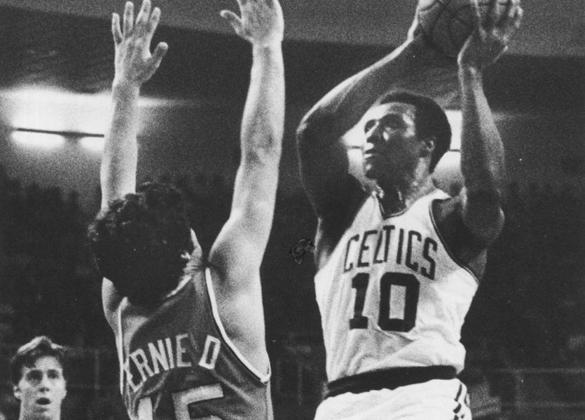 About his future teammate, White offered, “He does everything well and he’s a devil on defense. And he shot well. I hear he hasn’t been shooting so hot. Boy, he sure did tonight. He’s a really great guard.”

Indeed, the “Duck” had hit half his FG attempts and all four FT’s on his way to a 20-point performance. The scoring outburst may have been a bit out of character, but the rest of Don’s game (on and off the court) was the real thing. Whenever Mr. Auerbach got around to talking about “My Kind of Guys” – like in Chapter 2 of his On & Off the Court – the name Don Chaney was soon in the mix.

As the 1967 college tournament season was gearing up and NBA regular season was wrapping up, some storm clouds were rising on both fronts.

The controversial issue in college ball was The Stall, such as Dean Smith’s famous Four-Corner Offense. That particular temptation stuck around long enough to jump up and bite Coach Lewis in the ass – probably delayed his HOF induction, as well – during the Olajuwon/Drexler days.

The Overseers of the Sport did decide to make a significant and controversial adjustment to their game that summer, though. That’s when, in their infinite wisdom, they chose to outlaw the “dunk.”

For its part, the NBA Players’ Association, perhaps emboldened by the imminent arrival of another North American pro league, was making noises about a work stoppage heading into the playoffs. The decades-long bartering (that continues to this day) centered this time on pension benefits. 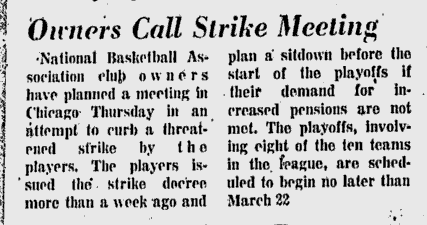 If consistency is a good thing, then it’s comforting to know that the NCAA has never been known to exercise any logic.