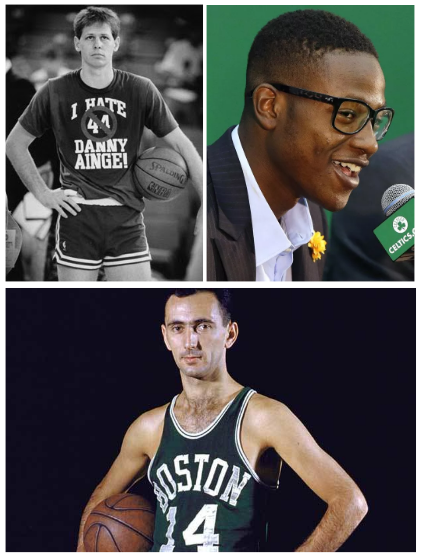 
In a ceremony some have since called the "Boston Tear Party", Cousy planned on delivering about a seven-minute farewell speech that went on for twenty minutes after Bob choked up repeatedly trying to deliver it. In one of the pauses, the air, thick with emotion, hung over the silence awkwardly during an especially long pause until a fan in the stands shouted, "We love ya, Cooz!", breaking the tension and bringing the crowd to life with cheers and support. Even then-President John F. Kennedy commented on the event, wiring the message:

"The game bears an indelible stamp of your rare skills and competitive daring."


Cousy retired after beating the Los Angeles Lakers in a six-game series in the NBA finals, a fitting exit for a man who logged an astounding THIRTEEN All-Star appearances - including two All-Star MVP performances - winning six NBA Championships (1957, '59, '60, '61, '62, '63) and the league's MVP award for 1957. Widely recognized as one of the top fifty players of all time, Saint Patrick's Day (March 17th) was as good a day as any for a legend to retire in Boston.

Speaking of Saint Patrick's Day, two current Celts share this day as their birthday - former guard and current General Manager and President of Basketball Operations Danny Ainge and guard Terry Rozier were both born today, 58 and 23 years ago respectively. No word on whether Rozier was drafted on the basis of his birthday (I kid), but it's illustrative of the depth of the winning tradition in Boston that the current head of the club was a whopping four years old when Cousy FINISHED his career.