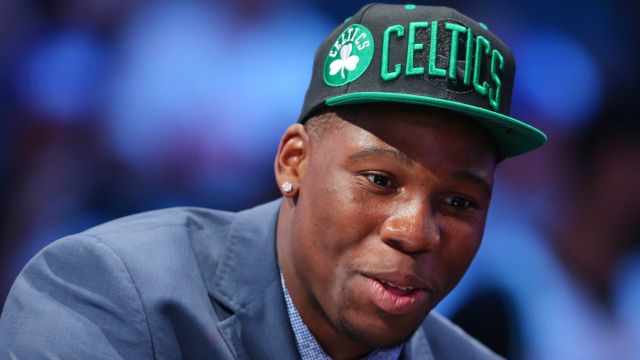 The Celtics 1st round pick in last years draft (16th overall) Guerschon Yabusele arrived in Boston this week and has inked a deal with the Maine Red Claws to finish out the season with them:

The ankle injury Yabusele is nursing will be the deciding factor as to when (if) he makes his debut in Maine this season. The Red Claws have seven more games between now and the end of the regular season, they're last game being April 1st. They have a 3.5 game lead for 1st place in their division and are essentially a lock for the D-League postseason, so there's an opportunity for some more action for Yabu there as well.

Guerschon made his first appearance at the TD Garden Wednesday night as the Celtics played the Timberwolves. He was on the parquet before the game with the team and spoke with the media postgame. Asked about what NBA player he would most compare his game to, he thinks he mostly resembles Warrior big man Draymond Green. Via Steve Bulpett of the Boston Herald:

“I might say (the Golden State Warriors’) Draymond Green. He’s been having a couple of incredible games,” he said. “So I think the comparison with Draymond Green is good.”

As much as it would be great to insert a Draymond Green clone, minus the crotch shots, to the Celtics lineup next season Yabusele isn't quite at that level just yet, but the Green comparison is certainly accurate in the way they play. Yabu is a plus defender with quick hands and a penchant for blocking shots, he can stretch the floor with his outside shooting, and he's very athletic for his bigger frame. In fact his athleticism has earned him the nickname "The Dancing Bear", which he likes:

But don't let the goofy nickname fool you, Yabusele also turns that athleticism to ferocity when he attacks the basket. He's drawn comparisons to Karl Malone the way he finishes dunks with authority, even throwing down "The Mailman's" signature hammer-dunk from time to time. Via Kevin Wang of ESPN:

"I was in a fast break, and all of a sudden it came to me," said Yabusele, who was the Boston Celtics' 16th overall pick in the 2016 draft and just finished a season with the Shanghai Sharks of the Chinese Basketball Association (CBA). "I wanted the people to feel the power."

Hopefully we'll get a chance to see Yabusele gets some action in the D-League before the season is out. The plan as of now is that Guerschon will be with the Celtics come training camp for next season, and likely he'll get some run with the big club next year.